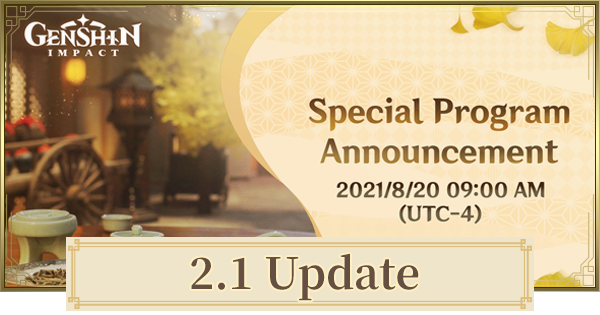 For a better gaming experience, players can pre-install the preload version 2.1 files. This will allow players to complete the bulk of the update download and other files that are needed for installations before having to wait for full installation when the update arrives.

How To Update In Desktop

In the game launcher, you can see the "Game Pre-Installation" on the bottom-left side of the launcher screen. Click it to start the pre-installation.

How To Update In Mobile Part 1

Players can access the pre-installation by going to the Paimon Menu > Settings > Other > Pre-Install Resource Package. for both iOS & Android uses to initiate.

How To Update In Mobile Part 2

Click the "Pre-Install Resource Package" located at the bottm left corner of the login menu.

According to the livestream, there will be 3 new 5-star characters and 1 4-star character. Raiden Shogun, Kokomi, and Kujou Sara will be banner characters, while Aloy will be an event exclusive character.

Yae Becomes A Vital Part Of The Story

Yae Miko is the Grand Priestess of the Grand Narukami Shrine. Although she did show up in the Archon Quest Chapter 2 Act 1, it was only briefly. In the continuation of Chapter 2, it looks like she'll play a bigger role!

A much-awaited return, Scaramouche will finally be seen again! Apparently, his origin story will be revealed upon playing the Archon Quest that will be added in the 2.1 Update.

Finally facing you head on, La Signora is the 8th of the Eleven Fatui Harbingers. As a high-ranking Fatui officer, she should be a powerful opponent and will likely have a Delusion form similar to that of Childe (Tartaglia).

Similar to that of the other Hypostasis, the Hydro Hypostasis is an elemental cube, but with a blue coloring to match its Element. It's likely that it will drop materials needed by the newly added characters.

The Thunder Manifestation has a form similar to that of the Oceanid. Since it's an Electro creature, its design includes purple accents and sharp angles.

Watatsumi Island contrasts the strong vibrancy of Inazuma's first 3 released islands. It's a pastel-colored island befitting of its ruler, Kokomi. This should be the next setting for the upcoming Archon Quest.

A land brimming with Electro energy, Serirai Island is likely to be the main headquarters of the Shogunate. If Kokomi rules Watatsumi Island, it's likely that Raiden has total control of Seirai Island.

The Moonlight Merriment is a new event coming to Genshin Impact. Set in Liyue, it's story will be tied to Keqing and will include Treasure Hunting, Festival Oculus Collecting.

Lunar Realm is an upcoming 2.1 event that will center around the new Fishing System that will also be added in the same update. Catch fish to get a number of Primogems!

Test your skills and push your team to limit with the Hyakunin Ikki event! The upcoming event will have travelers fighting multiple opponents at once to clear it for rewards.

Send your characters to the event expeditions to earn special rewards. It's premise is similar to the of the previous Vishaps and Where To Find Them Event.

During the 2.1 update, player top-up bonus will be reset. This means players will receive twice the amount of Genesis Crystals for purchasing a bundle for the first time. So far, this has only been announced for the China server. It's still to be confirmed if other servers will get this event.

Log in for 10 days within the Event date and receive 10 free Acquaint Fate ! This will work similar to that of the log-in event during the Lantern Rite Festival.

No need to use Klee's bombs to fish! A new fishing system will be added as part of the 2.1 update, allowing travelers to fish from different bodies of water using a rod! The fish you catch can then be added to ponds in your Teapot.

The continuation of Raiden Shogun's quest is expected to continue on version 2.1.

The story between the Resistance versus the Vision Decree Hunters, a.k.a Raiden Shogun's order might be continued in the 2.1 update.

Aloy is a new character introduced by Mihoyo. She is a character collaboration of Genshin Impact and Horizon. We might get a glimpse of her soon through her story quest!

Omnipresence Over Mortals was revealed during the 2.1 Livestream and will be added to Genshin Impact as part of the 2.1 Update. As soon as the update is live, players should be able to start this quest once they meet the requirements.

Luxurious Sea-Lord How to Get & Stats

Engulfing Lightning How to Get & Stats

Everlasting Moonglow How to Get

This section will be updated once it is officially released by Mihoyo.

For the upcoming 2.1 Update, these two (2) Inazuma Local Specialties might be released alongside with the game update.

Along with the new fishing system update for the version 2.1, there will be new materials and fishing rods that will be added in the game.