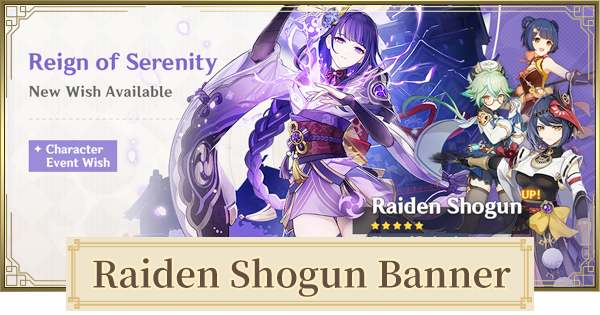 Baal's banner has been officially announced during the 2.1 Livestream as the first out of the 2 banners for the 2.1 Update. It will run before Kokomi's Banner.

Are You Pulling for Baal? Tell Us What You Think!

When do you think Baal (Raiden Shogun)'s Banner will release? Tell us in the ▼Comments below

Should You Pull In The Raiden Shogun Banner?

Raiden Shogun (Baal)l is shaping up to be a very strong Electo DPS or sub-DPS. Her on-field Elemental Skill in particular can easily fit any Electro-Charged or Overload team comps. As the main DPS, she can easily hold her own with the right build.

Kujou Sara Is A Good Addition To Roster

If you're planning on getting Baal, then having Kujou Sara is highly recommended since she's shaping up to be one of the best support for the Shogun. Note that even in other team comps, Kujou Sara is still a strong addition to a team.

As the Electro Archon, it's likely that Baal would be one of the best Electro characters in the game. Her Elemental Skill and Elemental Burst are both powerful and she can easily fit either as an Electro main DPS or sub-DPS.

Kujou Sara is making out to be a good Electro Support. In particular, she has great synergy with Baal so if you're getting Baal, it's recommended to get Kujou Sara too.

Sucrose is one of the best Anemo supports of the game. She can easily spread Swirl with any of her attacks and her Elemental Burst and Elemental Skill are great for crowd control.

Xiangling As A Pyro Sub DPS

Xiangling is one of the best sub-dps in the game thanks to her Elemental Burst that stays on the field even when she's switched out. Her Elemental Skill also debuffs enemy Pyro Resistance, further increasing the damage she can dish out.

Baal will be either in August or September, Mihoyo confirmed that update 2.2 will be introduced on October 13-14 so if Baal is in the first banner in 2.1 it should be in the middle of August

why early august? every update is 6 weeks apart and the 2.0 update is tomorrow so mathematically speaking the 2.1 update is early september. but mihoyo already stated baal is not coming in 2.1, maybe in 2.2 or 2.3 aka oktober or late november.

lol did not read they said 2.1 not 2.0 that already we know is Ayaka and Yoimya.
Mostly likely speculating we will probably need to fight our way to the Shogun so maybe only after 2.2? seems we will have to maybe fight Sara and maybe Yea?

Baal will not release first because ayaka is first, followed by yoimiya lol