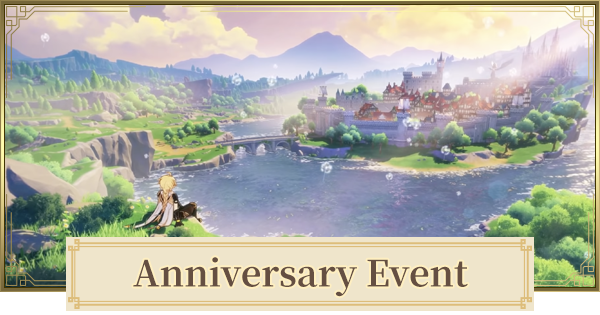 When Was Genshin Impact Released?

Genshin Impact was released during September 28, 2020. It will be Genshin Impact's Anniversary on September 28. The events related to it however will be inline with the 3.1 Update that will happen the next day.

3.1 Update will be released together with the second anniversary of Genshin Impact in September 28, 2022.

Log in for a total of 7 days to claim Intertwined Fate and other rewards. There will also be rewards to claim via your in-game mail such as Primogems.

Celebrate "Weinlesefest" at Mondstadt and earn primogems, various furnitures and a free 4 star polearm. It will feature various events such as treasure hunting, battles and even managing your own business!

Enter a puzzle domain and fight monsters for various rewards in this Wind Chaser Event.

Star-Seaker's Sojourn lets you explore Sumeru and do some challenges for various rewards. You will also need to gather an item called Future Star.

Hyakunin Ikki will be returning in version 3.1. Fight a series of battle with various teams to get various rewards.

If you bought the Genesis Crystals the first time, the double amount bonus will be reset.

After the 3.1 Update, players can get Collei for free for completing Spiral Abyss Floor 4 Chamber 3. This could be similar to Xiangling from Floor 3 Chamber 3.

Get rewards by simply logging in on the dates above. You can get a total of 20 Pulls so make sure to not miss it!

The Genshin Impact Anniversary Event will also conduct simultaneous web events that can be enjoyed by all the players! Participate on these events and get a chance to win some exciting prizes!

A series of 4 mails will be sent to each player containing different rewards for the Anniversary of the game! Players will have to collect the reward from their mail to add it to their inventory.

The Anniversary Events will also overlap with another upcoming event called Moonlight Merriment (Moonchase Festival)! The Liyue event will have its own set of event features for players to do.

During the Anniversary Log-in Event, players can earn up to 10 Acquaint Fates by just logging in once a day during the event's duration.

A Hooray for light to heavy spenders! The double crystal bonus will reset and you will get double the amount of Genesis Crystals on your first purchase. However, this bonus does not stack with the current status so if you plan to spend money, make sure to get all your bonuses before it resets!

Genshin Impact's Anniversary Community Event will mostly cater to players outside the game itself, meaning players will be engaging mostly in any social media platform. Join these community events and get a chance to grab those amazing prizes!

Another part of the anniversary celebration will be the Genshin Concent! It will be a livestream of the concert from different countries and will be available online globally. 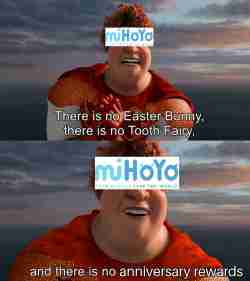 I think that's what mihoyo want, they deliberately drop our expectation so whatever ****ty reward they're going to give, it'll looks like a godsend and the gullible people in the community will defend them.
It's basically how abusive relationship works.

Ah yes, show appreciation for the great F2P community that couldn't get the stick out of their ***es and complained about every possible thing on every possible media during every single update. Ah fuck yeah, we'll give you the rewards you deserve, he's 3 fowl, take it or leave it