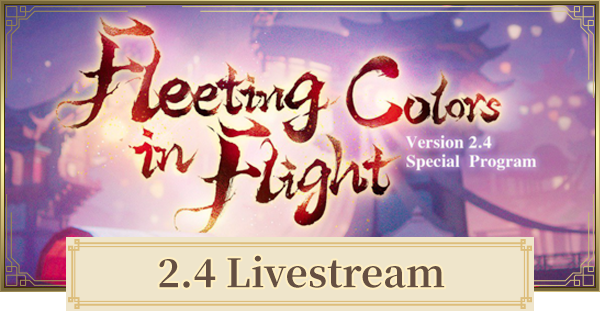 The 2.4 Livestream was held on December 26, 2021. The special program can be viewed through Genshin Impact's official twitch page.

It's announcement time! The special program for Genshin Impact's new version will premiere on the official Twitch channel on 12/26/2021 at 07:00 AM (UTC-5)!
>>>https://t.co/iSfDaE9iy6 #GenshinImpact pic.twitter.com/h1kdKdpGEz

Check our latest updates, fun facts, infographics and other contents on our Genshin Guide Twitter!

The Only New Characters For 2.4

According to the livestream, Shenhe and Yun Jin will be the only new characters to be released this 2.4 Update.

Shenhe comes from a known family of exorcists similar to Chongyun's family background. She was taken by the Cloud Retainer to be its understudy.

A famous performer at the Heyu Tea House. Yun Jin is the first Geo woman that wields a Polearm weapon, and is set to be released in the game soon!

According to the livestream, Mihoyo will introduce a new map in the game. A new world region that will be released this 2.4 version update of the game.

Bathysmal Vishaps are predators that are known as one of Enkanomiya's ancient living species. These creatures are located mostly in the pitch-dark watery part of Enkanomiya.

According to the developers, while exploring the world of Enkanomiya you will encounter these 3 enemies from Abyss Orders such as the Abyss Lector, Abyss Herald and lastly the new Pyro Abyss.

This event will be available in the 2.4 Update! Complete the event and collect two kinds of events' currency in exchange for (1) 4-star Liyue character in Prosperous Partnership!

A Study In Potions Event

Timeus, an NPC Mondstadt alchemist will attempt to create a legendary alchemical medication in this event! Help him complete his research and obtain various rewards!

A Study In Potions Guide & Reward

Take part of the event with the famous Inazuman creature, Kichiboushi the Tanuki. Show Kichiboushi the different local practices in every nation in Teyvat! Complete this event and obtain rewards!

The famous Hide and Seek kind of game is back again for 2.4 Update! Participate to this event with your friends or you can Co-op with other players online!

Double character banner once again for this version! Get a chance to obtain the Vigilant Yaksha, Xiao in the Xiao Banner Rerun and Shenhe through the Shenhe Banner for this 2.4 game update!

Another double banner for the second phase of the character banners! Obtain once again the Geo Archon Zhongli and the half-qilin adeptus Ganyu through through their banner reruns!

According to the livestream, (2) two new hangout events (Series V) permanently available after the 2.4 update which are Ningguang and Yun Jin's Hangout events!

Zhongli is the first ever Geo polearm in the game, not Yun Jin