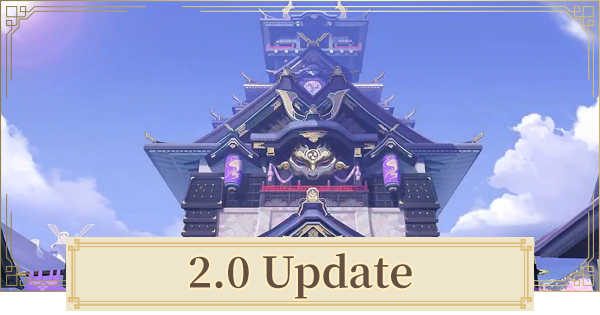 2.0 Update happened on July 21, 2021. Together with the update are new characters, new area and brand new systems.

The Livestream was announced by Mihoyo and it happened on July 9, 2021.

Ayaka's story quest, Grus Nivis Chapter: Act 1 The Whispers of the Crane and the White Rabbit is a new story quest for the 2.0 Update. Unlock this by completing the The Immovable God And The Eternal Euthymia Archon quest.

Yoimiya's story quest, Carassius Auratus Chapter: Act I Dreamlike Timelessness is a new story quest also in 2.0 Update. Unlock this also by finishing the The Immovable God And The Eternal Euthymia Archon quest.

Thunder Sojourn is a new event in the 2.0 update version. It has different challenges that contains various rewards.

Is a new event for this 2.0 update! It will require players to defeat enemies on a given time limit. The challenge difficulty can be changed according to the player's liking.

Theater Mechanicus is set to return in the 2.0 Update! This event has been confirmed and is going to be playable during the 2.0 update.

The Lost Riches Event will be available again after the 2.0 update. You get to choose another Pet Seelie as a reward upon participating in the event!

The Ley Line Overflow Event will be once again available! This will double the rewards of the Ley Lines for up to 3 times a day.

Inazuma has a city reputation system just like in Mondstadt and Liyue, where players will get a chance to receive a (1) Glider & (2) Gadgets upon leveling up their reputations.

You can now plant seeds and harvest plants by using plots in your Serenitea Pot realm. This feature will also require a Seed Dispensary which you can get after the 2.0 update.

Epitomized Path is a new feature that will allow you to chart a course and choose which of the two current 5-Star weapon you would like to get.

On the 9th of June 2021, Mihoyo officially revealed a set of characters that is said to be from Inazuma region.

Mihoyo confirmed these characters above during the version 2.0 update livestream!

Yoimiya is a new officially introduced character in Genshin Impact and will have its own gacha banner that will be released in the later part of the 2.0 game update.

Kamisato Ayaka, the Cryo & Bow character from the new region Inazuma finally going to be released as a playable character and will have its own gacha banner after the 2.0 version update.

Sayu is a new Anemo & Claymore character that was introduced during the 2.0 livestream update. Sayu is expected to be one of the characters that you can get from the upcoming Yoimiya Banner.

There are also some new faces that you will encounter during the Archon quest. These characters above will be released soon, no confirmed dates yet, so check back again to get more updates!

A new boss where you can get ascension materials for the new characters.

A new mechanical boss where you can get ascension materials for the new characters.

A new mechanical enemy that you can fight in the Inazuma Region.

A new fatui enemy that will encounter in the Inazuma Region.

Many Genshin Impact users are so excited about Inazuma and it is about to be released as the new area in 2.0 Update.

A Sacred Tree that symbolizes the Electro Archon's protection over the Inazuma Region.

An Island where you can see the remains of the Great Serpent that was defeated by the Raiden Shogun.