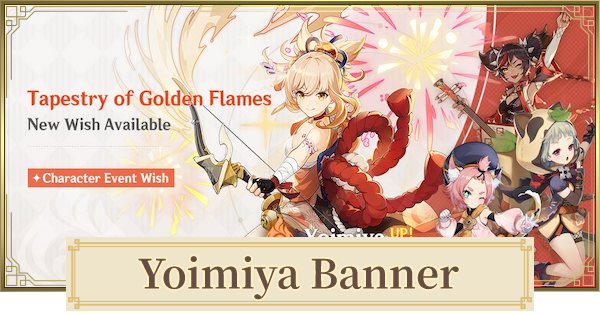 **The ratings for Sayu and Yoimiya is subject to change and will be greatly revised upon release of the character.

Yoimiya will be the banner next to Ayaka which will end on August 10. Yoimiya Banner is announced to be released on August 10, 2021 starting from 18:00 of your server time.

Try your luck at Yoimiya's Banner by testing out our Gacha Simulator!

Should You Roll Yoimiya Banner?

Sayu, Diona and Xinyan are excellent supports especially at high constellations where they can provide buffs and debuffs that will increase the DMG of your Main DPS.

Yoimiya excels at single target damage with her Pyro infused arrows. Her Burst provide an AOE option provided that she is on team with off field supports like Fischl and Xingqiu.

Yoimiya is the latest Pyro DPS that excels in range and single target DPS. Her Elemental Burst is a support and AOE option for the character that is needed to be triggered by other characters making Yoimiya a DPS that requires off field DPS to perform well. Her power also scales greatly with the power of her team.

Sayu can serve as a sub-DPS with her quick damaging elemental skill and her flexible Elemental Burst that both heals and damage opponents.

Diona is one of the best Cryo Battery in-game and can provide powerful shields and healing to the team. At high constellation, she can also provide Elemental Mastery which will greatly boost your reaction damage.

Xinyan is a shielder sub-DPS that suffers from split scaling. At high constellation, she can reduce the Physical Resistance of enemies which is a rare and useful trait if you are using a Physical DPS such as Eula.

I think Sayu, Xiangling, and Diona.

coz some 4 stars like xingqiu are already featured in 4 banners. the longest unfeatured 4 star who only has 3 banners are diona (4 months) and xiangling (5 months).

Ningguang and Chongyunnare on the current banner Willy are they the predicted characters?