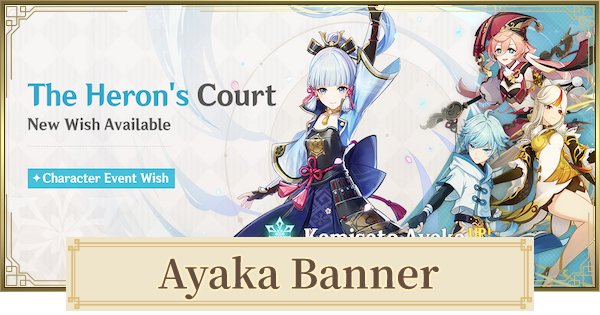 Expected To Be Released With Inazuma

Kamizato Ayaka is an important figure of the Electro Area, Inazuma. It would only make sense if she is released together with Inazuma. Because of this, it is likely that Ayaka's banner would release around end of July 2021 at Version 2.0.

There are rumors that Ayaka might be the first banner of 2.0 which will be released with the next version of the game. This is expected to happen on July 21, 2021 based on the 6-week update schedule of Mihoyo.

When do you think Ayaka's Banner will release? Tell us in the ▼Comments below

Ayaka Will Be The Featured 5 Star

Ayaka will be the 5 star in the banner. Characters with her should be able to support her skills.

Together With Other Inazuma Characters?

Since the timing is predicted to be the same as Inazuma's release, characters that hails from Inazuma might also be featured.

I swear, because of these events I’m literally going to have enough for klee