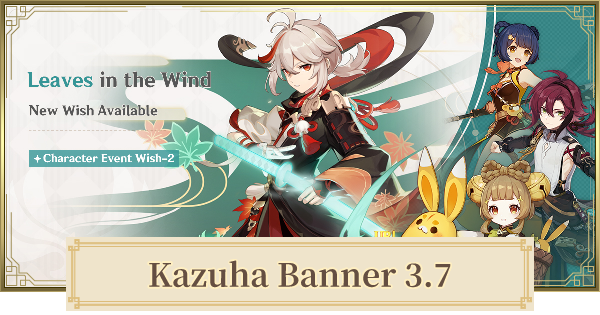 Kaedara Kazuha will have his first rerun banner in the first phase of the 2.8 Update! This was confirmed in the recent 2.8 Livestream along with Klee and Yoimiya's own reruns.

Heizou will be one of the 4-star featured characters in Kazuha and Klee's Banners. The rest of the featured 4-star characters are still unknown.

Kazuha is a wandering samurai from Inazuma who is currently with Liyue's Crux Fleet. He is a gentle and carefree soul whose heart hides a great many burdens.

Which Banner Are You Pulling On?

Should You Roll Kazuha's Rerun?

Kazuha - One Of The Best Anemo Characters

Kazuha Kaedehara is a 5-star support character with great sub-DPS capability and amazing crowd control. His Swirl reaction can further give buff towards the team and it can also deal a good DMG simultaneously using his Plunge Attack.

Kazuha is capable of dealing Double Swirls thanks to how his kit works. Take note that his Swirl has an Elemental Priority, meaning it will choose which element to swirl on the field depending on their priority. This is what causes double Swirl.

Although Kazuha's crowd control is not as strong as other Anemo characters, it's still a viable skill. Note that the vacuum from this plunge only lasts a few seconds.

Overall, Kazuha's one of the best Anemo characters currently in the game. Although his Anemo damage is not strong, it's his Swirl abilities really makes him an optimal elemental driver for the team.

Heizou's ability to Swirl with every attack is strong, but he provides more value as an Anemo Main DPS. He can synergize well with other characters whose off-field skills are activated with Normal Attacks.

Ningguang as a main DPS provides excellent Normal, Charged, and Burst DMG. Her Elemental Skill provides cover and additional buffs for a Geo team. However, as a Geo character, her team comps are a bit restricted since she cannot work with most Elemental Reaction teams

Thoma offers both shields and continuous Pyro damage. He's a great option for shields, but his builds are on the opposite side of each other. It's either focus on shield or damage, not both.

This section will be updated once Kazuha Rerun Banner is confirmed! Check back for more updates!

Kazuha has a huge potential of being a powerful Anemo Sub DPS. This is because of his buff that scales from Elemental Mastery and its powerful Skill.

Thoma's shields are good for protection, but note that it's not as strong as other shielders. He does have stable pyro application if you're looking for a Pyro driver for a Vape team.

Ningguang is a powerful Geo DPS that does not rely on reaction and skills to produce multiple and consistent Geo hits.