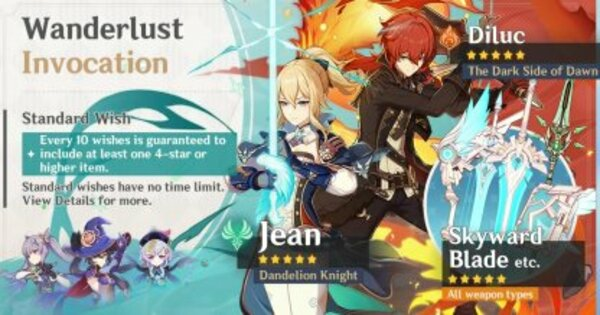 Jean was available when the game was released and never had a spotlight since, so we expect there can be a Jean banner in the future. However, considering the meta, Jean might not be on the top list for banner.

Not Shown in 1.4 Update Stream

Jean's Banner was not part of the banners shown in the latest 1.4 Update stream. Although it's still possible for her to appear without any prior announcement similar to that of Hu Tao's.

Expected Release On Latter Half Of Year 2021 At Least

Jean's banner is expected to be released no earlier than the later part of 2021. This prediction is made following the banner pattern of Genshin, as well as considering that bigger & newer character banner like Xiao has being lined for release for a while.

Jean Will Be The Featured 5 Star

Jean is a sub-healer / Anemo support in-games that will complement many party. Jean can provide crowd-control & mob damage to enemy swarms while healing some damage.

Jean's banner may be included with the introduction of new characters. Rosaria is a possible character that's affiliated to Mondstadt that can make the second portion of the banner.

Should You Roll Jean Banner?

Depends On If You Need A Support Vs Mobs

Whether or not you need another sub-healer / Anemo support will determine if you should roll this banner. If you feel that your team needs someone that can heal and do some damage & crowd controls at the same time, you can consider pulling Jean.

As getting a character up to usable levels & equipment can take a lot of resources, players are advised to consider if they can actually develop Jean if you pulled her. If not, you may need to spend vital time & resources to actually develop Jean to be on par with existing supports in your team, which can hurt your whole team in the long run.

I want Jean so badly I don't have any other Anemo aside from Traveler. She'd fit perfectly right in my team.