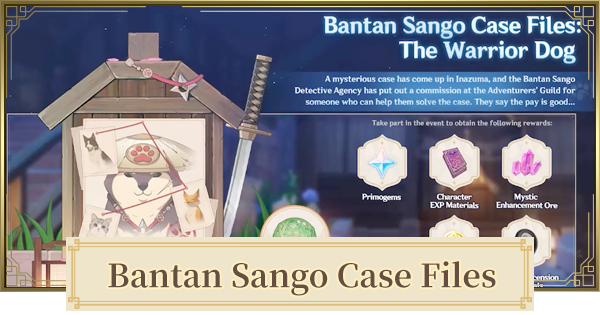 Bantan Sango Case Files: The Warrior Dog is said to be one of the prominent events to be released as part of the 2.3 Update of the game.

Head to the Adventurer's Guild in Inazuma and talk to Katheryne to start the quest.

Event Will Be Split Into Four Quests

The event will be split into four segments. All the objectives in one segment must be completed before the contents of the next segment can be unlocked.

▲You can use the Ubiquity Net gadget to capture animals while sneaking past enemies!

During the event, Travelers can go to various Places of Interest and rescue the animals by being in stealth mode or through combat.

How To Use The Ubiquity Net

When you enter a Place of Interest: Hiding Spot with the Ubiquity Net equipped, use it to replace your Elemental Skill with the capture ability and hit the marked animals to rescue them.

You can also use them to stun Canine Bunshins, rendering them unable to act for a short time.

Take note that the Ubiquity Net is different from the Omni-Ubiquity Net.

A newly introduced gadget that can be used to capture animals in the mortal realm in order to add the animal species inside your Serenitea Pot (Realm). It is obtainable after completing this event.

How To Get Omni-Ubiquity Net

After the event ends, complete the World Quest "Omni-Ubiquity Net". then go to NPC Wakamurasaki to exchange for the gadget. You can redeem up to 5 Nets per week.

Watch Out For Canine Bunshin

▲Observe their line of sight and avoid detection to avoid combat.

At Place of Interest: Hiding Spot, there will be Canine Bunshin patrolling the area. Travelers can also use the mechanisms at Places of Interest to evade detection.

Use Machines To Hide And Distract Canine Bunshins

There are machines that you can use to aid you in rescuing the captured animals.

Once activated, you can yourself within the smoke to prevent the Canine Bunshin from detecting you. You can also use the smoke to avoid further pursuit when detected.

▲You can also use arrows to activate smoke and firework machines

Fireworks can also be found in the investigation areas. Once activated, they will attract the Canine Bunshin's attention.

No Need To Sneak In This Part

You do not need to sneak to save the animals in this mini-game. You just need to defeat all of the enemies around the cages.

Location Is Marked By Samurai Swords

You can find the Den Of Thieves at the location in Inazuma Map with the icon that looks like two swords.

Mystery Of The Black Shadow Walkthrough

The Truth (Just About) Comes To Light Walkthrough

The Truth (Just About) Comes To Light World Quest Guide

imagine if the dog actually bacomes added to the abyss