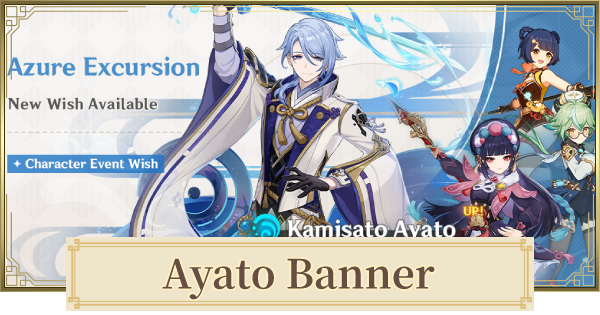 It was announced in the 2.6 Livestream that Ayato will have his own banner in the first phase of the 2.6 Update. The exact date of his banner and which 4-star characters he will be featured with are still unknown.

Will Have Double Banner With Venti

Ayato and Venti will have a double banner in the first phase of the 2.6 Update. They will both share pity and pull counts, and will feature the same set of featured 4-star characters.

Between Ayato & Venti, Who Will You Pull?

Known for his work and playful manner, Ayato is the current head of the Kamisato Clan. He's graceful and a master of the sword, similar to his little sister, Ayaka.

Try your luck and see if you can pull Ayato from our Ayato Banner Gacha Simulator here!

Should You Pull In The Ayato Banner?

Pull If You Need A Hydro DPS

Ayato's kit makes him a great on-field Hydro DPS. Currently, it's still not known the amount of damage he could do, so it also depends on that if he would be effective as a main DPS.

Similar to that of Ganyu's Burst, Ayato's Burst creates a field wherein Hydro continuously applies to enemies. It's a great on-field skill that can work to enable other DPS to deal Vaporize, Electro-Charged, or Freeze enemies.

Ayato's kit makes him great for either a main Hydro DPS or a Burst Support. He is able to produce consistent Hydro Damage and is easier to use because of his relatively short cooldown.

Sucrose is a must-have anemo support for reaction teams due to her ability to boost the entire team's Elemental Mastery while also providing Crowd Control by grouping enemies with her Burst and Skill.

Xiangling is one of the best Sub-DPS in the game thanks to her Elemental Burst, which remains on the field even after she is switched out. Her Elemental Skill also reduces enemy Pyro Resistance, allowing her to deal even more damage.

Yun Jin Is A Great Support For Normal Attackers

Yun Jin has the ability to boost characters' normal attack, allowing her to easily support any DPS who relies on normal attack as their primary source of damage. She works well with Ayato since his Elemental Skill enhances his Normal Attacks.