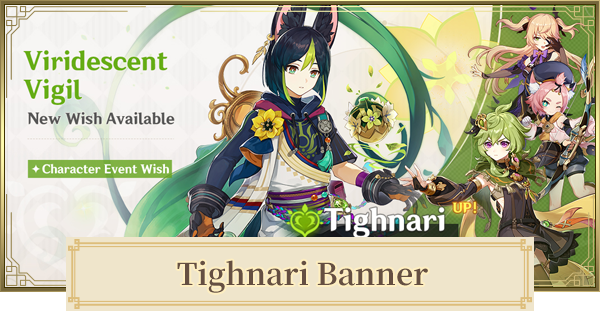 Tighnari's Rate Up Banner Will Be On The First Phase Of 3.0

Tighnari's banner will be one of the double banners of Phase 1 for the 3.0 Update. Viridescent Vigil will be released on August 24, 2022 together with Collei, Diona and Fischl.

A dendro character that resides in Avidya Forest, Sumeru region. Tighnari is a Botanist, and currently working as a Forest Watcher.

Try Your Gacha Luck With This Wish Banner Simulator!

Pull If You Want A Dendro DPS

Tighnari can be your main DPS in the game as he conducts good damage using his Elemental Skill and Burst.

Will Be Available In The Standard Banner

Tighnari, the primary value of this banner, will be added to the Normal Banner starting at Version 3.1. Because of this, he can be obtained anytime. If you want to play Tighnari as fast as possible, it is recommended to pull for this banner.

Tighnari is suited as your main DPS, as he provides good charged attacks with high dendro damage towards enemies while his Elemental Burst & Elemental Skills deal a significant amount of damage.

Collei is a good Sub-DPS/Support character. Her Burst is particularly amazing when it comes to applying Dendro to enemies since it's an AoE attack and lasts a while on the field.

Diona can provide powerful shields and healing to the team. On her higher constellation, she can also provide Elemental Mastery which will amazingly boost the team's reaction damage.

One of the best on-field Electro skills since Fischl can easily work with other characters to enable a continuous Electro-related reaction. Giving a good amount of damage while staying indefinitely on the field by juggling her Burst and Skill.