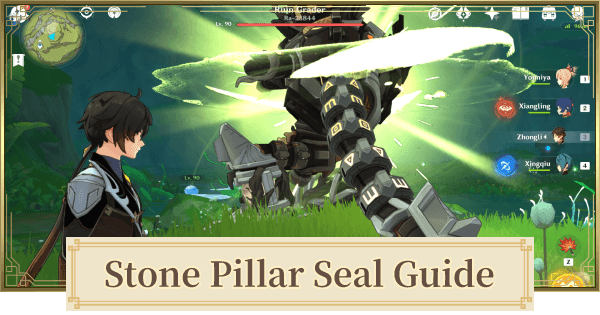 Stone Pillar Seal is a Sumeru gimmick in Genshin Impact 3.0. Guide includes how to unlock, map & all locations, walkthrough, tips on how to find them, and rewards for Stone Pillar.

Stone Pillar Seal - How To Unlock

Pyro Characters Can Unlock The Seal

Character With Bow Is Convenient For Unlocking

Since each stone pillar is located at a different distance, using a pyro-infused charge attack with bow character makes it easier to break the seal.

Some stone pillars are obstructed by an entangled wall that can be destroyed by hitting with Dendrogana. Typically, a Dendrogana source is nearby when you see this type of wall.

② Stone Pillar Seal Near The Statue Of The Seven

※ You need to progress with Agnihotra Sutra Quest to enter the cave.

※ If the area is rainy, you can manipulate the weather in Apam Woods using Varuna Contraption.

※ You need to progress with Vimana Agama: Royinjan's Chapter (Linga) Quest in order to access the cave.

⑮ Stone Pillar Seal In The Middle Of Devantaka Mountain

After defeating the enemies that are sealed by the stone pillars, a chest appears. You can get a total of 16 chests since there are 16 locations available.

Unlocks Legends Of The Stone Lock

Once you cleared all 16 stone pillar seal locations, the Legends of the Stone Lock becomes available and it is a world quest in Sumeru. The quest will lead you to the 17th Stone Pillar

Legends Of The Stone Lock - How To Unlock & Rewards

What To Do If The Quest Didn't Unlock?

If after clearing all 16 stone pillar seals and the quest was not unlocked, you can try restarting the game and checked all the locations again to see if there is a seal that you need to clear again.

Which underground cave where i can meet with 4 aranara?

The quest didn’t unlock for me automatically either after the 16th. But I returned to where the 4 Aranara are in the underground cave and it immediately triggered the quest. Hope this helps.

As of now, I also do not have access with the quest, despite finishing all 16 pillars (I marked them down as well so I won't forget which one is which).

My problem was solved. After going through each of the stone seal again there's one mech that somehow re-sealed. Maybe the patch yesterday was for this bug?

I have the same problem as the other commenter. I've done all 16 of em and still havent got the quest