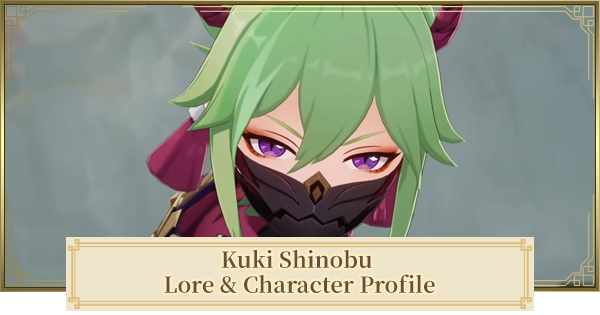 Who Is Kuki Shinobu?

Kuki Shinobu is the second in line after her boss Arataki Itto. She mostly handle the external and internal affairs of their gang, at the same time cleaning up their mess and bailing them in some dangerous situations.

Kuki Shinobu came from a family of Shrine Maidens that serves at the Narukami Grand Shrine. She was once a shrine maiden understudy when she was young.

Kuki Shinobi left the Shrine Maiden path on her accord with a curious mind thinking if she is capable of something else, thus she took initiative to learn everything such as crafts and other skills thus obtaining numerous certificate of achievements.

Kuki Shinobu is known as a reliable member of Arataki's Gang. Every time the gang members are stuck on such dangerous situations, Kuki Shinobu will always be there to help and bail them out.

Kuki Shinobu has also appeared and mentioned in various in-game quests, such as story quests, world quests and events in the game. You may encounter Kuki Shinobu on different locations depending on the quest.

Following the previous banner format Kuki Shinobu might be released on June 21, 2022 as part of the second phase of Version 2.7.