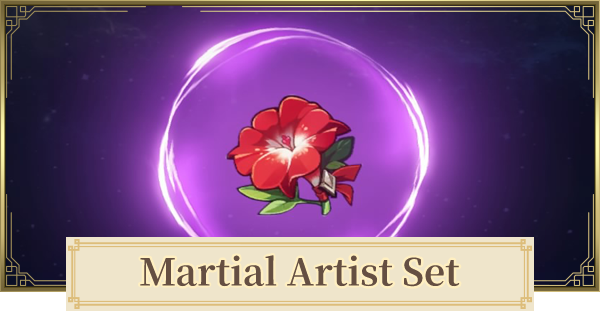 Martial Artist is an artifact set in Genshin Impact 3.0. Guide includes locations of Martial Artist artifact, set bonuses, how to get, & best characters to equip!

The two-piece set bonus increases the damage of the user's Normal and Charged Attack by 15%.

The four-piece set gives an additional increase in Normal Attack damage by 25% after using an Elemental Skill. This does not apply to Charged Attacks.

Since the Martial Artist Artifact is focused on increasing Normal Attack damage, it's very good for Bow and Catalyst users. With the added Charged Attack Damage, it becomes even better for them.

Good For Characters That Rely On Nomal Attack

Additionally, it's good for characters that rely heavily on their Normal & Charged Attacks. Eula, Razor, and any Physical Damage-focused build for a character will work with this.

Not Recommended Beyond Early Game

Although the Set Bonuses are great, it's not recommended to be used beyond early game. At higher ARs, it's better to replace this with another 5-Star Artifact to get the most stats.

Unlike main stats, Sub-stats will only be randomly applied & enhanced every 4 levels of artifact upgrades. This means that getting a perfect stats for the artifact may require some grinding.

Some Stats Has Fixed Value Or Percentage Increase

Some stats increase has 2 types of buffs:A Fixed Value or Percentage Increase (Such as DEF + 10 vs DEF +10%). A rule of thumb is that a percentage increase will be more beneficial in the later stages of the game due to stat increase from leveling up.

Martial Artist How To Get & Domains

Drops From The Following Bosses

This Artifact Does Not Drop From Enemies

Currently, this Artifact Set cannot be farmed by defeating enemies since it does not drop from any of them.

Farmed In The Following Domains