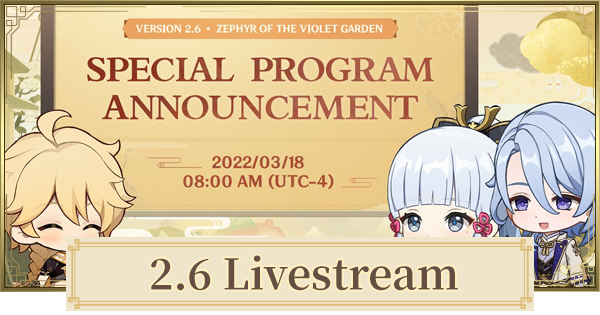 It's announcement time! The special program for Genshin Impact's new version will premiere on the official Twitch channel on 03/18/2022 at 08:00 AM (UTC-4)!

The Chasm is a new area in Genshin Impact that is confirmed to be coming in 2.6 game version update.

Ayato Kamisato, brother of Ayaka and the head of the Kamisato Clan is confirmed to be the new Genshin Impact 5★ character that is set to be released on the 2.6 Update.

The confirmed banners for the 2.6 Update will be Ayato , Venti and Ayaka character banners.

The Ruin Serpent is a new type of enemy that was shown and introduced during the 2.6 livestream, and will be located in the upcoming new area, the Chasm.

A new event where elemental skills and bursts will be unavailable during the combat, therefore, players will be require to use Parry Skills to dodge the enemy attacks.

The Moon And Stars Inscribed

A new event that was introduced during the livestream. This event will be involving taking photos of certain items or materials.

Ikebana Event is back again but this time with various flowers and plants to choose from. Create and design your own flower pot and obtain rewards.

Theater Mechanicus is confirmed to have a rerun for 2.6 Update. Defend against incoming enemies through the use of elemental Mechanicus & obtain rewards!

Spices From The West

In this event, you will be helping a certain woman from Sumeru through her research in Liyue about different spices.

Spices From The West

A research from the Fontaine nation will be conducting a research about Vibro-Crystals. Conduct different transmitters & receivers against the enemies.

Outside The Canvas, Inside The Lens

A girl name Asagiri from Inazuma will asked the players to take photos that will require a specific poses. Participate to this event and obtain various rewards!

Outside The Canvas, Inside The Lens Event Guide - Release Date

Ley Line Overflow will be back again for the 2.6 game update. Obtain double rewards for a limited time, so do not miss out this event!

A new archon quest is confirmed to be coming in the game for the 2.6 update, where as we will be encountering Dainsleif once again.

It is confirmed that the head of the Kamisato clan, Ayato will be having its own story quest in the game.