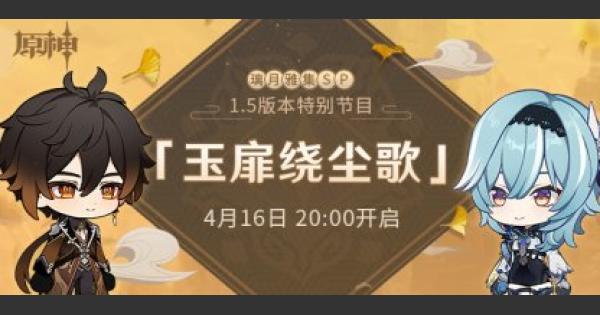 It was announced that both Chinese Livestream will happen on April 16. Check below for the specific date:

It was also announced that the English livestream will be released hours after the Chinese one.

Eula, a Cryo Claymore Character, which is related to Mondstadt is confirmed. Since she is a 5 star she will also have her own banner side by side with Zhongli's Banner.

Since Tartaglia's Banner happened on version 1.4, it is expected by many that the recently buffed Zhongli will also have its own banner. This was confirmed in the livestream.

Yan Fei confirmed to be released on 1.5. She is a Pyro Catalyst. She is also has Adepti blood like Ganyu. She will appear in Zhongli's Banner

Azhdaha is confirmed to be released on version 1.5.

Cryo Hypostasis confirmed for 1.5. It is said that it will appear on Dragonspine.

The Following are rumored events that is said that will be released on version 1.5:

Zhongli's Story Quest is also confirmed! Travel once again with Zhongli around Liyue!

A puzzle dungeon game. This will receive

A hide and seek event between players.

Play the event and receive a free Diona!

Get the double of amount of Talent books every pull during the event.

You can build houses and islands in this new system and get rewards by accumulating points!