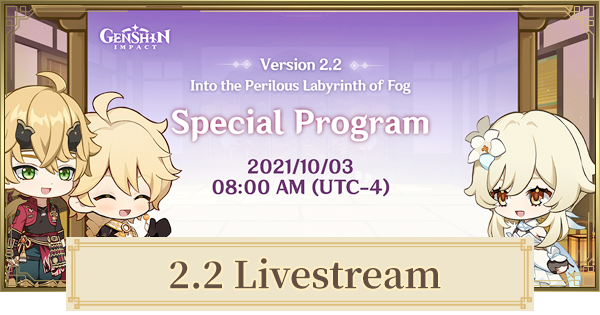 It's been announced that the upcoming 2.2 Livestream will be held on October 3. The special program can be viewed through Genshin Impact's official twitch page.

It's announcement time! The special program for Genshin Impact's new version will premiere on the official Twitch channel on 10/03/2021 at 08:00 (UTC-4)!
>>>https://t.co/iSfDaE9iy6 #GenshinImpact pic.twitter.com/h1kdKdpGEz

Expect some major updates, from key bindings, bug reports, new areas to new characters! Check back again to get more updates once the 2.2 Livestream date is officially announced.

According to the livestream, Thoma will be the only new character to be released this 2.2 Update.

Chief Retainer Of The Kamisato Clan

Thoma was born in Mondstadt and now resides in Inazuma. Living under the roof of the Kamisato Clan, also he is a good friend with the Kamisato Siblings, Ayaka & Ayato. He is the clan housekeeper and a very well-known fixer inside Inazuma.

First Banner Will Be Childe's Rerun

Get a chance to get the powerful Hydro Enabler, Childe, in his second rerun. This will be the first banner of version 2.2.

Hu Tao is a powerful berserker Type DPS that will surely fit various team-comps. Don't miss the chance to get her on version 2.2.

Tuned To The World's Sounds

A new rhythmic game similar to the Ballads of Breeze. Players will receive an instrument as a gift from Kazuha, and shall be used in the said rhythm game event.

Tuned To The World's Sounds Guide

Shadow Of The Ancients

Players will need to survey 6 different areas in order to activate the Pursina's Spike, with the use of a new gadget called Ayesha's Chaos Prospector to locate the Survey spots.

Shadow Of The Ancients Guide

Is a new event consist of planting, growing, gifting, and arranging flowers. Players can also present these flowers as a gift to their friends or other players.

A new combat event similar to the Legend Of The Vagabond Sword , where players will also meet the new enemies and obtain a free Xinyan upon completing the event!

The hangout event is back, this time players will get a chance to know Sayu and Thoma more by accompanying them with their own hangout event!

An Inazuman Realm themed will be a new Serenitea Pot Realm that will be released in the 2.2 Update.

A new Inazuma island that is similar to the area of Wuwang Hill in Liyue, where the whole area is covered by fogs and trees.

mi do not muhe ye rifthounds

BSNUJGQFUTPM is the third code

NB6VkHQWVANZ is the second code

LBNDKG8XDTND is the first code