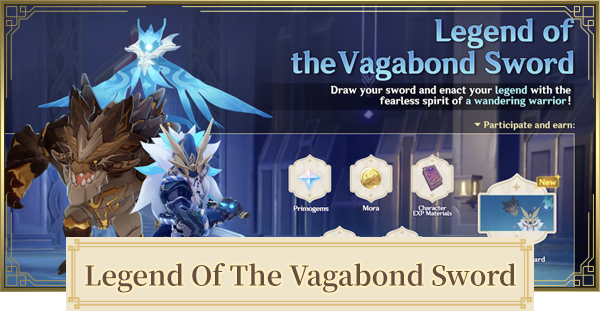 Check Out The Updates & Latest News

Legend of the Vagabond Sword is one of the events announced in version 1.6. The event is confirmed to release on June 25, 2021. Everyday a new challenge will unlock and all of the challenges will be unlocked on the 7th day.

Upon reaching Adventure Rank 20, Legend of the Vagabond Sword will automatically appear on your event screen. Check it from the menu to find the challenge location.

Similar to previous boss challenge events, high scores from different stages will be totaled and those score will be the basis of the rewards that you will receive. You can challenge the boss multiple times so try multiple times for higher scores.

Play It In Co-Op Mode

Enjoy playing this challenge more with friends via Co-Op mode! Check our ▶ Multiplayer (UID Exchange Forum) and start adding and playing with friends!

The boss has no different moveset from Primo Geovishap so use the strategies that you have when battling this boss in this challenge. The only difference for the boss in this stage is the ability to change elements.

The boss will continuously change elements during the battle. This make all rounder shields such as Geo Shields a crucial part in this challenge. Make sure to have at least one shielder in the team.

NRE (Menu30) Can Be Used During Battle

You can eat during the battle. To make this easier, the Gadget NRE. With this Gadget, you can opt to just have a team filled with damage dealers.

There is an option to increase the skill's CD to 150% while the Elemental Burst will increase the ATK of the team that will last for 5s. It is wiser to not choose this option as it will contradict the usage of the shield.

Use Characters With Shield

It is recommended to bring at least one character with a good and strong shield skill in order to protect your team party.

The boss will always have Hydro inflicted to it making it easier for players to deal Vaporized damage. Use Pyro Fighters such as Klee and Yanfei for higher damage against the boss.

Unlike in the Oceanid domain, Rhodeia's not fighting instead it is spewing water animals in the ground in order to attack us, but this time, Rhodeia will be the one attacking us. You can also directly give damage to Rheodeai.

Rhodeia will soon conduct a powerful water blow and in order to avoid Rhodeia's attack, search for the Fitful Rapids and step on it as this will eventually lift itself.

Avoid choosing this option as it requires a huge amount of downtime for the skill, if the difficulty level increases it will decrease the defense support.

The boss has no different moveset from Maguu Kenki so use the strategies that you have when battling this boss in this challenge.

Attacks from afar can be blocked by the boss' mask. Because of this, it is recommended to battle in close range to the boss.

Beat Both At The Same Time

If player fails to defeat both Maguu Kenki (Lone Gale & Galloping Frost) at the same time, they will both revive each other.

The bosses uses different elements in their kits so to counter all of them, it is recommended to use Geo and Anemo characters.

You will fight 3 bosses consecutively in this stage, make it easier by not limiting yourself to time constriction.

Legend Of The Vagabond Sword - Rewards

In Legend of the Vagabond Sword, it allows players to accumulate scores that will make them increase their milestone which can also be use to claim more corresponding rewards such as Talent Level Up Materials and Moras.

Average Of 4300 Is Needed To Get All Rewards

To get all rewards, you just need to get a score of 4300 every day. It should not be that difficult especially if you already have a builded character. However, if you are having difficulty, it is recommended to join Coops.