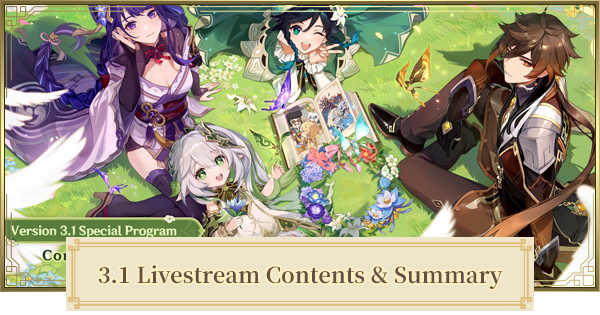 Hoyoverse will have a special program for TGS 2022 featuring Genshin Impact! This will be held on September 17, 2022. This is a separate program from the next version special program. For more details check the article below:

The upcoming Sumeru characters that are showcased before will now be coming to the game! They will be released on 3.1 Update! They are also showcased during the live stream.

During the 3.1 live stream, there are also some characters that have appeared once again on the 3.1 livestream.

Scaramouche As A New Boss Fight For 3.1

Scaramouche was shown in the 3.1 livestream as a new boss in the game.

Algorithm of Semi-Intransient Matrix of Overseer Network is a new boss introduced and showcased during the 3.1 Livestream.

A new boss that has a dragon-shaped mechanism body was introduced during the 3.1 live stream.

There are also new NPC enemies that were shown during the 3.1 livestream. One is a woman with a bow fighting Candace, while the other one can summon a creature.

Cyno and Nilou will have their own character story quests in the upcoming 3.1 Update!

A new upcoming exploration event that will be held in the Mondstadt region.

A new Sumeru adventure event that will be available for the upcoming 3.1 update. Participate in this event and obtain various rewards!

A new domain challenge that consists of wind current mechanisms. Participate in this event and obtain various rewards!

Hyakunin Ikki will be having a rerun this 3.1 update. Participate to this domain challenge and obtain rewards such as primogems, mora, weapon and talent ascension materials!

According to the 3.1 livestream, the 3.1 Update will be having a double character banner each phase. For phase 1, it will be Cyno, Venti (rerun) and Candace. For phase 2, it will be Nilou and Albedo (rerun).

A new permanent gameplay will be available soon in the game! It was showcased during the 3.1 livestream. It is said to be released on 3.3 Update.

Cloud Retainer's Damasked Device is a new seelie that was shown during the 3.1 live stream. According to the developers' the players will be receiving this new seelie via in-game mail as an anniversary gift from Genshin Impact.