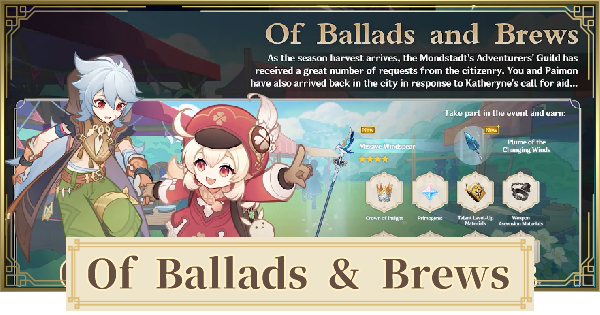 Of Ballads And Brews is an upcoming event in Genshin Impact 3.1. Guide includes Of Ballads and Brews release date & duration, gameplay features, rewards, and more!

Of Ballads And Brews - Release Date & How To Unlock

Of Ballads and Brews is an event that was released on the 3.1 Update. During the event, players will join everyone in Mondstadt to celebrate the Anemo Archon's return.

Will Include Finding Out About Razor's Parents

Players will finally be able to uncover the mystery behind Razor's parents and what led to him being raised by wolves. Grand Master Varka will also play a part in the story though he won't be there physically.

Of Ballads And Brews - Gameplay Features

Help hunters deal with the invasion of Forest Boars and help a researcher from Sumeru search for clues concerning the Snowboars. In these challenges, you can only use Normal Attack and Hunting Nets.

Autumn Crisis has 3 Challenges to complete which are Expulsion, Capture, and Uproot. Each challenge requires a certain amount of points to claim all the rewards.

You will gain use of the new ability "Sublime Anemograna", which creates a powerful blast. Use it as you clear enemy camps during this event.

For this event, manage your own store. Sell ingredients to create wine and fulfill commissions to further increase your store's funds!

Charity And Creativity Guide & How To Manage Shop

Locate Treasure Chests around Mondstadt. These unique chests include the well wish of the people of Mondstadt and their rewards inside.

Of Ballads And Brews Events And World Quests

Of Ballad And Brews has 3 Event Quests revolving around Razor and his desire to find out the truth about his parents. This also features various characters from Mondstadt and the new character, Mika.

Of Ballads And Brews - Rewards