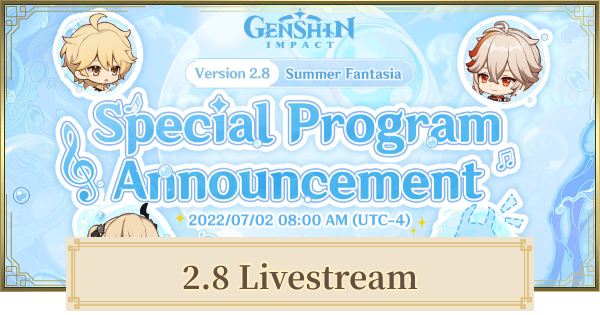 It feature juicy details about V2.8. It will also "drop" some redemption codes and more!#GenshinImpact pic.twitter.com/G7rVshJ9ki

Kazuha will be having his own story quest for the upcoming 2.8 Update that was revealed during the livestream.

Shikanoin Heizou was introduced first via Genshin Impact's official account and it is said to be released on the 2.8 Update.

It is officially announced in the 2.8 Update that there will be a double character banner! A back to back with the character Klee, Kazuha and the new anemo catalyst, Shikanoin Heizou!

The character banner for the 2.8 Update Phase 2 will be full of lively and full of sparkle as it will be the Naganohara owner, Yoimiya.

Embark on a new island journey as this new 2.8 event will be included in the 2.8 Update! Complete this event and get free Fischl as part of the reward.

Participate and complete the various events that will be conducted inside the Golden Apple Archipelago. Unleash your Waverider and Glider skills in this upcoming event!

Find and listen to the Phantasmal Conches that are scattered around the Golden Apple Archipelago. Listen to the different stories from various voices from the past. Complete this event and get Fischl's new skin as part of the reward!

A new upcoming quest that is related to Diluc that is located at the Dawn Winery. Participate in this event and obtain various prizes!

Help Felix Yogue, a person from Fontaine to solve these set of mechanism puzzles. Join this event and obtain various prizes and even furnishing!

It was confirmed during the live stream that Shikanoin Heizou will be having his own Hangout Event!

Golden Apple Archipelago will return for the 2.8 Update with various events and prizes once again! Take a sneak peek of the new appearance of the archipelago!

We're given a Sumeru teaser through the live stream, check out the images below for some glimpse of the new upcoming nation!

It was revealed during the live stream that Diluc and Fischl will have their own skins!

Check Out The Other Skins Here!