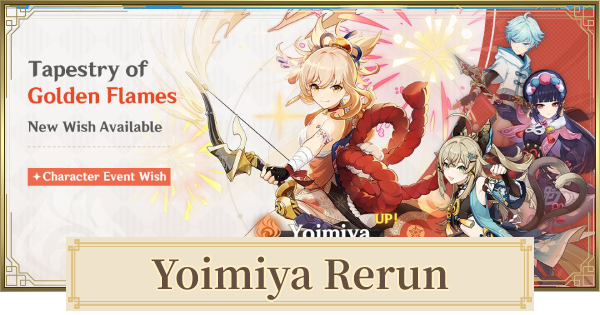 Yoimiya will have her rerun banner in the second phase of the 2.8 Update! This was confirmed in the recent 2.8 Livestream!

Yoimiya is well-known throughout Inazuma as the "Queen of the Summer Festival" and the owner of the Naganohara Fireworks. Her cheerful and bubbly personality seeks to deliver happiness to anyone who sees her fireworks in action.

Should You Roll Yoimiya's Rerun?

Bennett, Yun Jin, and Xinyan are excellent supports, especially at high constellations where they can provide buffs and debuffs that can give a boost to increase the DMG of your Main DPS.

Yoimiya Can Act As Main DPS

Yoimiya excels at single target damage with her Pyro-infused arrows. Her skills are so quick and easy which is why she is capable to be used as a main Pyro DPS, given that she is on the team with off-field supports like Fischl and Xingqiu.

A Pyro DPS that excels in range and single target DPS. Yoimiya can damage enemies while off-field, using her Elemental Skill and Burst. Her power also scales greatly with the power of her team.

Bennett can simultaneously increase ATK & heal. With Noblesse Oblige, he can further increase the ATK of the whole team. His constellations can be obtained in all banners and limited banners that feature Bennett. It is recommended to pull for his constellation at least once to improve his healing ability.

Xinyan can used as Physical DPS or Shielder. When she hit at least 2 enemies with her elemental skill, her shield pulsates which can inflict Pyro damage to nearby enemies. Although Xinyan's constellation improves her combative & supportive capabilities, it is not recommended to aim for Xinyan when pulling unless Xinyan's rate is boosted.

Yun Jin is a support that provides normal attack DMG bonus making her a great pair for characters such as Ayato & Yoimiya. Her constellations can be obtained in all banners and limited banners that feature Yun Jin. If you main characters like Ayato & Yoimiya, it is strongly recommended to pull for her constellation to further amplify her abilities to support.

Wanting to try your luck? Try this wish simulator for Yoimiya Rerun Banner and you might be able to pull Yoimiya within the first few pulls!