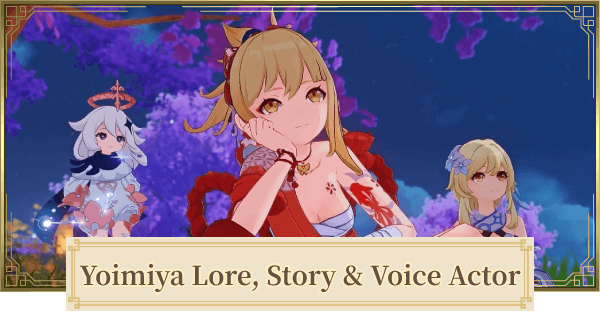 Yoimiya is a talented pyrotechnician and she's well-known throughout Narukami Island as the "Queen of the Summer Festival."

Owner Of The Naganohara Fireworks

Yoimiya is the current owner of Naganohara Fireworks and the people of Inazuma love her for the fabulous fireworks that she creates. She's in charge of the fireworks displays for various celebrations in Inazuma.

On one summer night, Yoimiya heard a tinkling sound and a burning-red object fell into an unused launching tube. At first, she used her Vision as a lighter until her father explained the Vision to her. Since then, she became even more skilled in the manipulation of fire. Though sometimes, she would ask herself this: "How did someone as ordinary as me receive the acknowledgment of the gods? Do the gods... enjoy fireworks, by any chance?"

Yoimiya has also appeared in various in-game quests, such as archon quests, story quests, and events in the game. You may encounter her in different locations depending on the quest.