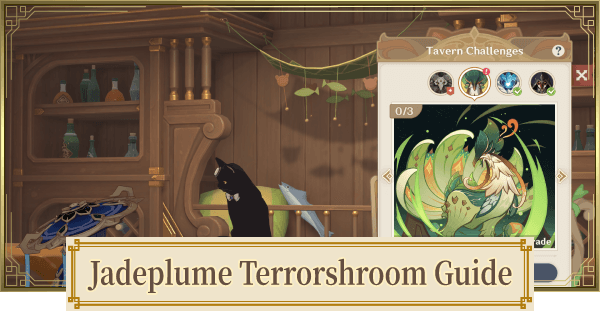 Jadeplume Terrorshroom's Parade is the sixth Tavern Challenge available and Friendly Fracas can be unlocked when you reach TCG player level 8.

For Friendly Fracas, the opponent uses Jadeplume Terrorshroom with 36 HP and equipped with Proliferating Spores.

Serious Showdown Can Also Be Unlocked

Same as Friendly Fracas, you can unlock Jadeplume Terrorshroom's Display when you reach TCG player level 8 but you must complete all of the ▼objectives of Friendly Fracas first.

It is similar to Friendly Fracas but the only difference is that Jadeplume Terrorshroom in this mode has 48 HP.

Defeat NPC Challengers For Leveling Up

To gain player EXP and level, you need to defeat NPC challengers and complete the weekly guest challenge.

Talk To Prince At The Cat's Tail

When you reach TCG player level 8, go to The Cat's Tail at Mondstadt and talk to Prince to initiate the Tavern Challenge.

How To Complete All Objectives

Likely To Use Burst

Once Jadeplume Terrorshroom has acquired 2 energies, Burst is likely to be used which can deal an amplified Dendro DMG due to its passive stacks. Also, any element status your active character has can be triggered so as much as possible, avoid using a character that can apply you with an element.

Whenever Jadeplume Terrorshroom deals or takes elemental damage, it gains 1 passive stack. Let it accumulate the maximum stacks for every round. If the passive stacks do not reach 4 when the next round starts, the energy and passive stacks are carried over.

Recommended Actions Per Round

Use 3 moves that can deal elemental damage per round since Jadeplume Terrorshroom is guaranteed to use 1 Skill. When the round ends, it is likely to have 4 passive stacks which will be removed later on including energy.

Elemental Damage From Summon Are Counted

You can have up to 4 summons simultaneously. The elemental damage dealt by the summoned unit is counted prior to the following round so use this to your advantage.

You can avoid getting defeated if you can utilize a healer or HP-restoring cards in your deck. The right timing and accurate calculation are crucial for its effectiveness.

There are cards that can reduce incoming damage. For instance, Lotus Flower Crisp can lessen the damage received by 3 but you can use food card on a character only once per round.

Freeze Is Not Effective

Jadeplume Terrorshroom is immune to any crowd control element so using Freeze comp is useless.

It is recommended to use a lineup that can trigger elemental reactions other than Freeze. The reactions are great for dealing additional damage which can significantly decrease the HP of Jadeplume Terrorshroom.

Active Deck Is In Use

Set your active deck in the Casket of Tomes before you start the Tavern Challenge. The active deck is marked by a blue flag with 2 swords symbol.

Elemental Tuning Can Be Used

In case you do not have useful elemental dice and you ran out of chance to reroll, you can sacrifice an action card to replace it with an elemental die that matches the active card.

You can also get Proliferating Spores Card which can only be used if Jadeplume Terrorshroom Card is included in your deck.

You can get 1,000 Lucky Coins from completing Serious Showdown.

Beat Other Enemies In Tavern Challenge