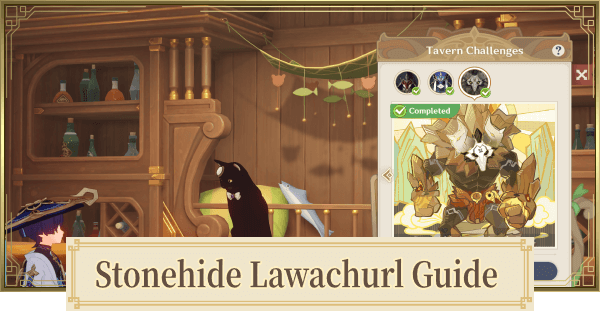 Stonehide Lawachurl's Rest is the fourth Tavern Challenge available and Friendly Fracas can be unlocked when you reach TCG player level 6.

For Friendly Fracas, the opponent uses Stonehide Lawachurl with 16 HP and equipped with Stonehide Reforged.

You can unlock Stonehide Lawachurl's Majesty when you reach TCG player level 7 but you must complete all of the ▼objectives of Friendly Fracas first.

It is similar to Friendly Fracas but the only difference is that Stonehide Lawachurl in this mode has 24 HP.

Defeat NPC Challengers For Leveling Up

To gain player EXP and level, you need to defeat NPC challengers and complete the weekly guest challenge.

Talk To Prince At The Cat's Tail

When you reach TCG player level 6, go to The Cat's Tail at Mondstadt and talk to Prince to initiate the Tavern Challenge.

How To Complete All Objectives

The passive of Stonehide Lawachurl makes it durable and could take several turns to be removed. Before going all out, ensure that the shield is no longer there.

Geo Damage While Passive Is Active

When shielded, all of its damage is converted from Physical DMG to Geo DMG. As much as possible, avoid using moves that can apply you with an element that can be triggered with Geo as it can gain shield points when it triggers Crystallize reaction.

Likely To Use Burst

Once Stonehide Lawachurl has acquired 2 energies, it is likely to use Burst which deals 5 Physical DMG or Geo DMG when passive is still active. If your active character's HP is 5 or less, switch to another character so you do not fail 1 of the objectives.

Passive Can Be Reactivated

When one of your character cards has been defeated with Burst, it regains its passive and it conjures a shield while converting all of its damage to Geo DMG.

Stonehide Lawachurl initially has a shield and can be tanky. Its Burst only require 2 energies so it is likely to be used after 2 Normal Attacks & Skills. You can halt its actions by freezing.

Since the opponent only uses 1 character card, freezing Stonehide Lawachurl forcefully ends the opponent's turn for the round. You can take this opportunity to setup or take an offensive action in succession.

Sustain Freeze Or Proc Other Reactions

While freezing can give you an easy time to setup, triggering other elemental reactions are also great since it can deal additional damage.

Include Talent Cards In Your Deck

The talent cards are advantageous since it improves the effect of a character's talent.

Active Deck Is In Use

Set your active deck in the Casket of Tomes before you start the Tavern Challenge. The active deck is marked by a blue flag with 2 swords symbol.

Use Card To Heal

Use all of your dice to perform an offensive move for every round as much as possible. If you want to heal, you can include Sweet Madame Card in your deck which has 0 cost and it does not end your turn upon use.

Elemental Tuning Can Be Used

In case you do not have useful elemental dice and you ran out of chance to reroll, you can sacrifice an action card to replace it with an elemental die that matches the active card.

You can also get Stonehide Reforge Card which can only be used if Stonehide Lawachurl Card is included in your deck.

You can get 1,000 Lucky Coins from completing Serious Showdown.

Beat Other Enemies In Tavern Challenge