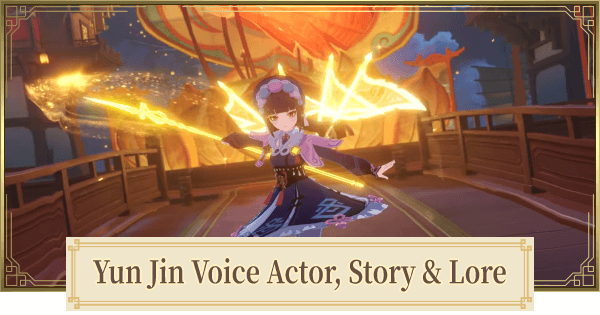 Who Is Yun Jin?

She is the director of the Yun-Han Opera Troupe and is also a famous figure in Liyue Harbor's opera scene. Yun Jin is known for her animated and dynamic performances, as well as her sweet singing voice and intricate costumes.

Her Ancestors Used To Work As Weaponsmiths

Someone in the family who was tired of weapon forging grew an interest in the performing arts. By the time it came to Yun Jin's generation, few of the Yuns still practiced the art of forging.

What broke her bottleneck was an opera named "Snow Treading". It was a monodrama about a strenuous walk in the snow. Having gone astray in the snow, the character felt lost and lamented her helplessness. Somehow, the snow in the story seemed to fall into reality. Yun Jin, who had also found herself adrift, felt as if she had become her character. Yun Jin could no longer recall how she returned backstage after the epiphany. All she knew was that when she finally had time to take off her costume, she found a Vision in her sleeve.

Yun Jin has also appeared in various in-game quests, such as archon quests, story quests, and events in the game. You may encounter her in different locations depending on the quest.