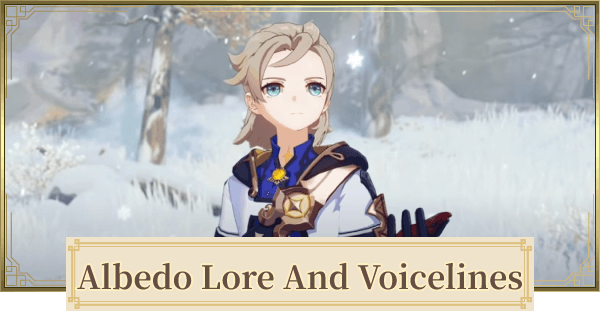 Chief Alchemist Of The Knights of Favonius

As the Chief Alchemist of the Knight of Favonius, Albedo is admired by the people of Monstadt and was given titles such as "Genius", "Kraideprinz", etc. He is a young man that displayed the true prowess of alchemy to all that even the Sumeru Akademiya did not possess.

Albedo came into Monstadt with the help of Alice, a famous travel writer and Klee's mother. Alice asked Albedo to treat Klee like a real younger sister and so he did. Since then Albedo have taken care of Klee and treated her like a real family.

Albedo's interest in drawing eventually turns him into a master artist. He enjoys sketching and painting until one day he collaborated with Xingqiu as the artist for his novel "A Legend of Sword" which receives fame in Inazuma.

Albedo has also appeared in various in game quests, such as story quests and events in the game. You may encounter Albedo on different locations depending on the quest.

Character Voiceline That Talks About Albedo