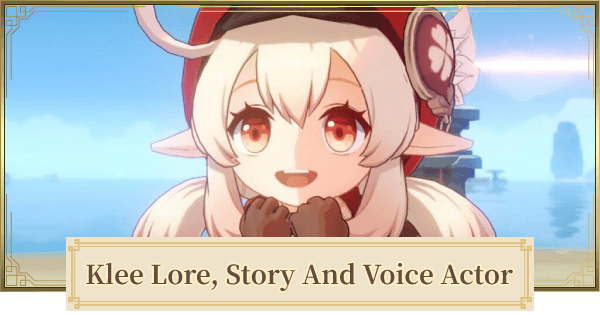 Klee is the Knights of Favonius Spark Knight, also known as Fleeing Sunlight.

Klee is an energetic girl who likes creating explosives and calls them her treasures. She is particularly fond of "fish blasting." She's an official member of the Knights of Favonius, however, Klee's antics often get her into trouble and Jean will send her to solitary confinement to self-reflect.

Klee's Mother and Her Relationship With Albedo

Klee's biggest role model is her birth mother—Alice. Alice is a highly renowned adventurer and author of the popular Teyvat Travel Guide. Klee has many treasured memories of her mother, however, her parents left to travel to somewhere dangerous and far away. Her parents entrusted Klee to the care of Albedo and the Knights of Favonius.

Klee has also appeared in various in game quests, such as story quests, world quests and events in the game. You may encounter her on different locations depending on the quest.