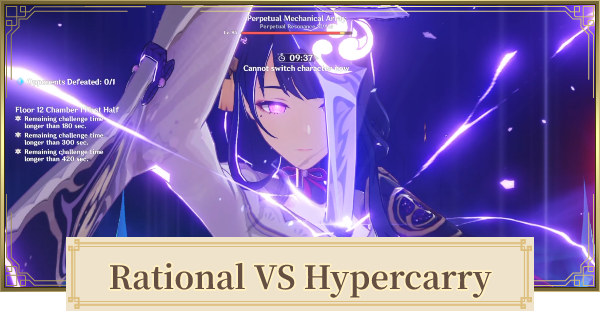 Genshin Impact
Raiden National Team VS Hypercarry Comp - Rotations & Which One Is Better?

Raiden National VS Hypercarry - Which One Is Better?

If you are only going to calculate damage against enemies, Raiden Hypercarry deals more damage over Raiden National. If you are fighting against a single enemy that is not immune to Electro, Raiden Hypercarry is the better choice. This is especially good if you have Raiden Shogun at Constellation 2.

Raiden Hypercarry has an amazing Oneshot potential since it maximizes the first hit of Raiden's Elemental Burst.

While Raiden Hypercarry deal more damage, Raiden National is the preferred choice for various challenges such as Spiral Abyss because of its ability to deal with multiple kinds of enemies regardless of their Element.

As for the cost effectiveness of the teams, Raiden National is preferred since you can also use the characters in this team to other powerful comps such as Hutao + Double Hydro, International Childe and Sukokomon.

Which One Do You Think Is Better?

What Is Raiden National Team? (Rational)

Raiden National Team, also known as Rational, is a variant of National Team that includes Raiden Shogun and the 3 powerful 4 Star characters, Bennett, Xiangling and Xingqiu. In this team, Raiden acts as a Buffer, Battery, Main DPS and enabler fully maximizing all aspects of Raiden Shogun's Kit.

Team Comp & Build For Each Character

Raiden Shogun is not only the main DMG dealer in this team but also the battery for the Elemental Burst of the rest of National Members. If the Burst is not active by the end of Elemental Burst, increase the ER of Raiden Shogun. 250 or above Energy Recharge should be enough for it.

What Is Raiden Hypercarry Team?