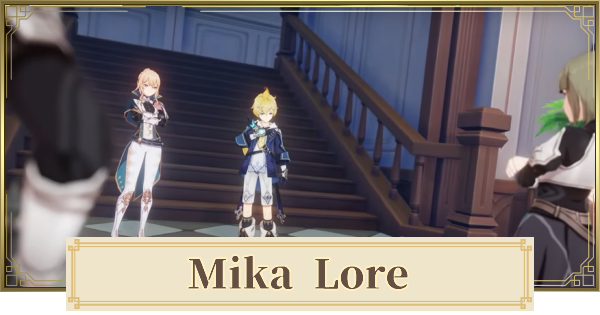 Mika is a new character shown during the 3.1 Update's trailer. He's a young lad and based on his introduction, he's a Surveyor of the Reconnaissance Company from the Knights of the Favonius.

Surveyor Of The Reconnaissance Company

Mika as a Surveyor of the Reconnaissance Company brings news to the Knights of Favonius. He is shown to have a letter from Grand Master Varka.

Based on Mika's appearance during the Of Ballads And Brews Act 1 (Sounds from Afar), you can spot the vision on his right hand that shows a Cryo logo.

Appeared On Of Ballads And Brews Act 1

On the first half of the Of Ballads And Brews Event , Mika was shown at the Knights of Favonious' headquarters, reading Varka's letter.

There are currrently no voicelines regarding Mika present in the game.