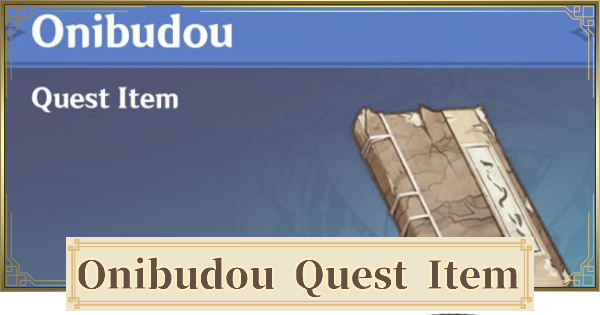 Genshin Impact
Onibudou - How To Get & Related Quests

Onibudou is a quest item in Genshin Impact. This guide includes how to get Onibudou, uses, how to unlock, related quests, and more.

What Is The Onibudou? - How To Get

The Onibudou is basically the first draft of the current novel being written Junkichi, a writer from Inazuma. It's being published by the Yae Publishing House and is going through a bit of editing based on its related quests.

The Onibudou isn't picked up or looted from the world, rather it's given as part of the "This Novel..." quest line. Once you've reached the last part of the quest line, the Onibudou will be added to your inventory.

The whole Novel Quest Line are Commission Quests, meaning players can only play them if they're added to their list of Daily Commissions for the day. Since Daily Commissions are random, there's no guaranteed way of getting these quests.

To increase the chances of getting the "This Novel..." quests, players can set their Daily Commissions to the Inazuma region. You can do this once you've progressed through Archon Quest Chapter 2 Act 1.

Only Used For the Quests

Like other Quest Items, the Onibudou is not useable after it's been used as part of the quest. it will still be in your inventory and you can read it in-game, but that's about it.