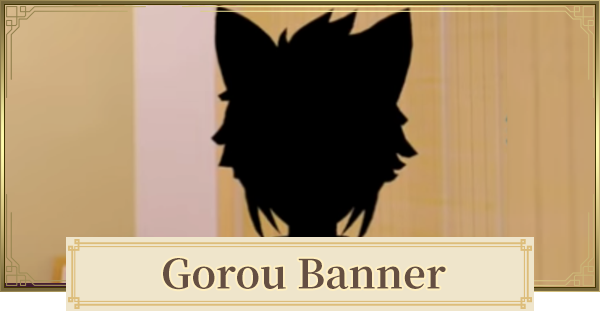 Expected To Be Released With Inazuma

Gorou was seen during Kazuha's voice actor Nobunaga Shimazaki. You can notice Gorou's silhouette on the right side of the screen. It would only make sense if he is released together with Inazuma.

According to rumors going around social media, it states that Gorou will be the second banner of the next update 2.1. If this is true, it is expected for Gorou's banner to appear around August, 2021.

When do you think Gorou's Banner will release? Tell us in the ▼Comments below

Gorou Will Be The Featured 5 Star

Gorou will be the 5 star character in the banner. Characters with him should be able to support his skills.

According to one of Kazuha Kaedehara's voice lines, he talked about the Kujou Clan and mentioned Sara Kujou. He stated a brief introduction of what Sara's character might seems to be, is she a villain? or not?

its confirmed now that gorou is a 4 star

I strongly hope Gorou is a 5*... I'm gonna be so f*ing upset if Kokomi is a 5* and he isn't. Probably gonna quit this stupid game afterall, it's being disappointing asf lately

you are the idiot here Gorou is 4*, just because he has 'Dreams of Dragonfell' weapon doesn't mean he's 5*, btw I replied to the comments below

Gorou us most likely gonna be a 4* on Kokomi or Yae Miko’s banner. Signs point to hes gonna be playable in 2.3 or sometime in 2.2 since Mihoyo is working on Thoma at the moment.

He's most likely going to be a four star one one of the new banners, hopefully Yae Miko's??