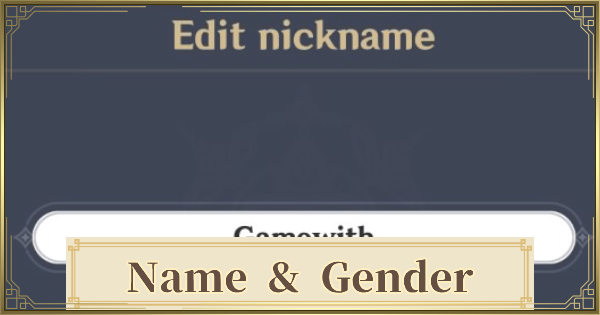 Check this How To Change Name & Gender Guide for Genshin Impact. Learn how to change name, name selection, name of your character, name of the twins, traveler name, voice & more.

How To Change Name?

Can Be Done Multiple Times

In Genshin Impact, you can change your name whenever you want. So, no need to worry about what are you gonna name the main character.

How To Change Gender?

Unlike the name, the Gender of the Traveler cannot be changed. So, think well before choosing your main character.

Is There A Difference Between The Twins?

Gameplay wise, there are no huge difference between the twins . One notable difference would be their voice actors.

Translation mistakes is a thing, it's especially noticable in non-JP/CN/KR/EN translations.

What anon below said is false. I play with 2 accounts and no one ever referred female mc as he/his. unless that person is forever stuck at version 1 there voice lines for both Mc were mixed and male mc was referred as she/her as well.

I'm just annoyed with how many times they say he/him when talking about the female traveller, it just ruins the emersion (think that that's the word???) and makes it really obvious that the male traveller is the intended choice...

Listen I picked Lumine before I realized I'm ~not cisgender~ and now seeing Lumine in the cutscenes and knowing that she's supposed to represent me is Awfully Uncomfortable. Pain