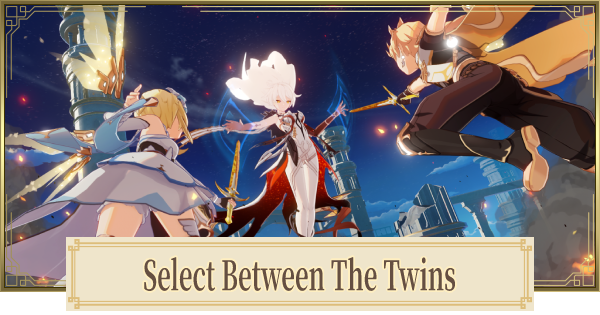 Genshin Impact
Which Twin Should You Choose | Aether Or Lumine

Which Twin To Choose | Aether Or Lumine is a guide for Genshin Impact. Learn about the differences, which twin is better, damage output, cutscene, animations, names, story, gender, Aether, and Lumine.

Beginner's Guide & How To Play

Choosing Between The Twins

You will pick either of the twins at the very start. The twin that you pick will be the main character that will appear in cutscenes.

You can change the name of the selected twin. The unselected twin will automatically use the default name.

Differences Of Aether And Lumine

In comparison, Lumine has a higher charged attack compared to Aether. This gives Lumine the advantage of dealing more charge attack damage output.

The twin that you choose will be the twin that will appear in the cutscenes. Regardless of which twin you pick, you will be called "Traveler" in the story.

Aether and Lumine have different voice actors and actresses from several countries. You can switch the twins' voice-over into various languages available in the settings.

Climbing speed is also affected by the height. Aether is faster at climbing than Lumine. You can decrease stamina usage when climbing with anemo resonance.

Similar to sprinting, the height of the character also affects the swimming speed. Given that Aether is taller than Lumine, Aether swims faster than Lumine.

Aether and Lumine have different normal attack animations. They also differ in posture when executing elemental skills and bursts of different elements.

Which Twin Is Better: Aether Or Lumine?

There are only small changes between Aether and Lumine and these small changes will not have a significant effect on your gameplay. Feel free to choose on other factors such as voice and design.

As of now, there is no other available character outfit for the twins besides the default outfit. We are hoping to see them in different costume and animation effects in the future.

There actually are differences between them. Namely the boy can run for longer due to higher stamina. The difference is even greater when using Diluc or Kaeya.