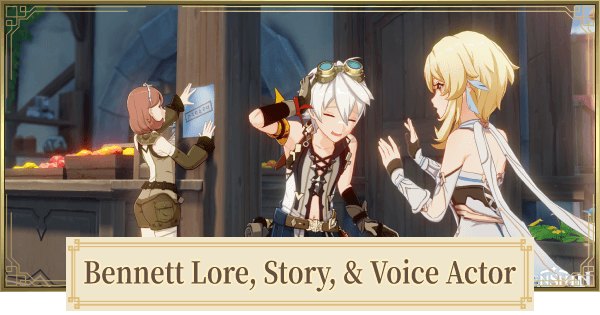 One of the few young adventurers of the Monstadt Adventurers' Guild, he is always plagued with inexplicable bad luck. He is the only active member of his own adventure group, known as "Benny's Adventure Team", after all the other members decided to "take leave" following a series of unfortunate incidents. As a result, the team is currently on the verge of being dissolved.

Initially, the team mechanism requiring at least 3 or 4 regulars in each team was set up to promote mutual support and prevent accidents. As for Benny's Adventure Team, however, its only regular member has been Bennett himself. The lack of team members essentially has everything to do with his infamous bad luck.

His tightly-wound emotions came loose, allowing his many injuries to rob him of his consciousness, and he collapsed. When he reawakened, he found that his wounds has been cauterized by a mysterious flame, stopping both the bleeding & pain. A jewel pulsed warmly in the palm of his hand, its rhythm in time with the heartbeat in his chest — the beating heart of an adventurer. This was not the mercy of the world, or that fate took pity on him. Rather, this was his "final reward", one befitting a person with his burning passion.

Bennett has also appeared in various in-game quests, such as story quests, and events in the game. You may encounter him in different locations depending on the quest.