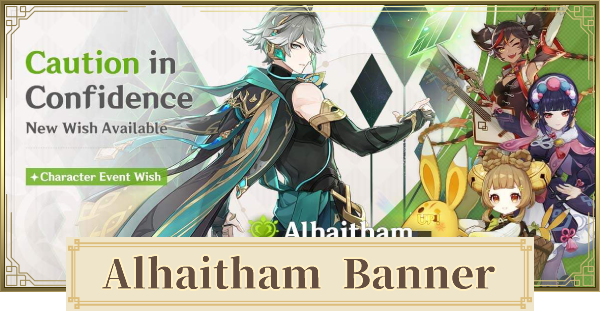 Banner For Alhaitham, Caution In Confidence, is a banner for version 3.4 of Genshin Impact. See featured characters, should you pull?, release date and more for Alhaitham Banner!

To Be Released In The First Phase Of The 3.4 Update

Alhaitham's banner has no definite start date yet, but it's confirmed to be in the first half of the 3.4 Update.

Will Have A Double Banner With Xiao

Alhaitham and Xiao will have a double banner in the first phase of the 3.4 Update. They will share the same Pity counter and featured 4-stars.

In Sumeru, Alhaitham is known as the Akademiya's Scribe, meaning a person who is in charge of studying scriptures, documenting various files, and also conducting research.

Which 3.4 Banner Are You Pulling On?

Should You Roll Alhaitham's Banner?

Pull If You Need A Dendro DPS

Alhaitham deals AoE based on his Chisel-Light Mirrors on the field which converts to dendro DMG, thus his Chisel Light Mirrors will be coordinated with his normal attack. His Burst conducts a huge Binding Field that deals with multiple instances of AoE Dendro DMG making him a good choice for a Dendro DPS.

Which Banner Should You Pull (3.4 Update) - Strategy & Primogem Guide

Are The 4-Stars Worth Pulling?

Get Yaoyao For A Dendro Healer

Yaoyao is the first Dendro healer introduced in Genshin Impact. Having her would make it easier to build Dendro-based teams since she can provide Dendro application & healing at the same time.

Yun Jin's biggest benefit is being able to boost the Normal Attacks of her team. She can work with a number of Normal Attack-based characters, including Itto, Yoimiya and Ayato.

Xinyan For A Pyro Shielder

Xinyan isn't particularly strong right now Meta-wise. Her damage isn't strong and her Pyro application lacks compared to other characters. Her shields are also not as tought.

Alhaitham is a decent dendro DPS that deals AoE damage on the field based on the Chisel-Light Mirrors he produced during battle. His skills are flexible you can use his skill even if you changed characters while in combat.

Yaoyao is the first Dendro healer to be released in the game soon. Since Yaoyao's skill damage and healing numbers are not yet out, it's hard to know how good of a character she is in combat.

Yun Jin is capable of boosting the normal attack of characters so she can easily support any DPS that uses normal attack as main source of damage. She can also build a shield for her team.

Xinyan has a DEF-scaling, making her relatively easy to build. However, her damage scaling is not that high and her shield isn't really as strong as the shields from other shielders.