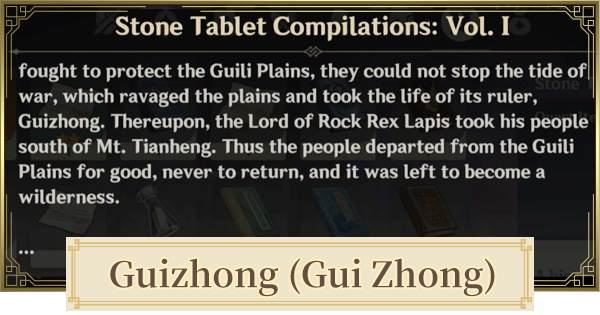 Guizhong, the known Lord of Dust in Genshin Impact. Learn about a brief story about Guizhong, related quest, the Guizhong Ballista, Lover's Oath (Guizhong's Lullaby), death and relationship with Zhongli!!!

The Lord Of Dust

The late Guizhong is known as the Lord of Dust, one of the rulers of the Guili Assembly, Zhongli's good friend and the creator of the known Guizhong Ballista.

During the Archon War, the Lord of Dust Guizhong has ended her life while fighting together with the other Adeptis to protect the mortal world from the evil gods and monsters.

She was also mentioned or featured in some archon quest and world quest in the game.

Guizhong is fond of machine learning, she conducts research and experiments regarding the machines related to the Ruin Guard & Ruin Hunter, thus also on how she created the Guizhong Ballista.

A domain or realm created by the Lord of Dust to contain the ancient and evil forms that she acquired.

Guizhong created a huge crossbow mechanic called the Guizhong Ballista. She created this weapon in order to protect the people residing at that time in the Mt. Tianheng area.

Get To Know Her Through Books!

This book has a summary of the past life and contribution of Guizhong to the Liyue Region. This book can be obtained inside the Knights of Favonius Headquarters (Grand Master's Office).

It is said that Guizhong's Lullaby is about a love story that has a sad ending. A love that never bloomed because she had to part ways in a tragic way, which is death.

Listen To The Official Audio

The Lover's Oath is known also as Ghuizong's Lullaby can be accessed through Mihoyo's Official Youtube account under The Shimmering Voyage Disc 2. Check below the video for the full OST album!

According to the Memory Of Dust's weapon story, a woman who's talking to a man that seems to be Zhongli is said to be Guizhong.