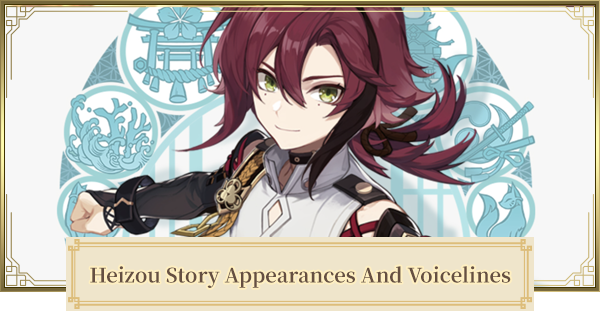 Shikanoin Heizou is a new character announced for version 2.8 and revealed to be featured in the First Phase banners of the 2.8 Update. Shikanoin Heizou was released on July 13, 2022.

Who Is Shikanoin Heizou?

A Detective & A Prodigy

Heizou or widely known as Shikanoin Heizou is a young & admirable detective from the Tenryou Commission. He seeks to be a good detective, so good that criminals will think twice on committing a crime in fear of being caught by him.

Whenever the Tenryou Commission is assessing some unusually complex cases, be it a minor, major, or mysterious one, everyone suggests Heizou as their last hope to do the job.

His Father Made Him Learn Martial Arts

Even though he prefers to avoid physical combat, he finds it unavoidable to use the martial art skills that his father made him learn whenever he's solving a case.

Kano Nana is a distant relative to Heizou. She is located at the Grand Narukami Shrine and you can just approach her to talk about Heizou.

Has His Own Hangout Event

Get to know Heizou by taking part in his Hangout series that is permanently available in the game. Join Heizou to solve some mysterious cases and receive various rewards upon completing the hangout endings!

Heizou Was Mentioned In Sayu's Hangout

During Sayu's hangout, Kano Nana (NPC) blurted some words regarding a boy name Heizou. She told the traveler during the hangout that he always gets himself into trouble since he doesn't abide by the rules.

Heizou was mentioned by Ryuuji durung the event called Bantan Sango Case Files: The Warrior Dog Event, talking about slighty about his personality as a fellow detective.

Based on Shikanoin Heizou's splash art, you can see his Anemo vision dangling on his waist beside his weapon.

Heizou is quite a unique character wherein he is a melee fighter that uses a Catalyst to imbue his attacks with Anemo!

Thanks for the infos, but you put Sword in the weapon section of his basic info, Voice actor and profil!

POLEARM SUPPORT OR DPS AND IM IN