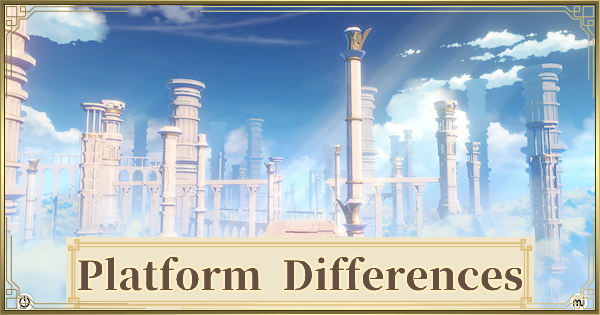 PC & Mobile Users Can Change Most Of Their Graphic Settings

PC and Mobile players has many options when it comes to graphic settings. For a smoother gameplay, it is recommended to change these settings according to the performance of your PC or Mobile devices.

PS4 players has limited options when it comes to Graphics. They can only change the V-Synch and Motion Blur setting.

For Mobile & PC Players, You Can Directly Cast Elemental Burst

In Mobile and PC devices, by pressing a specific button, you can switch to a character and automatically cast their Elemental burst.

For PS4 Players, You Need To Change Characters First

To cast the Elemental Burst of characters, you must first switch to the character and press the button for the skill.

For mobile and PC players, you can choose which server you will access at the Log-in screen.

However, once you chose a server the data on the account is linked in that server and cannot be transferred to another server.

For PS4 players, the server is automatically chosen depending on the Country of your PSN account.

You can easily switch devices in PC and Mobile by just logging in using the same account information to the preferred device.

Data Transfer For PS4 Is Not Possible

Because of PSN restrictions, it is not possible to transfer your PS4 data to other consoles such as PC or mobile devices.

All Devices Can Play With Other Devices

It is possible for mobile, PC and Console players to form teams and do multiplayer so long as the players are both in the same server.

For PC & Mobile Players, You Can Pay Using Any Device

For PC and Mobile players, you can charge or pay using whatever device you want to use. However, you must be using the same account so it can be trasferable.

PS4 players are limited to only using their PSN Account for microtransactions.

For Mobile & PC Players, Get Items At Pre-Launch Event

A pre-launch event was held that will give a chance to Mobile and PC players to receive strong items and artifacts.

Get Ready For The Road Details Here!