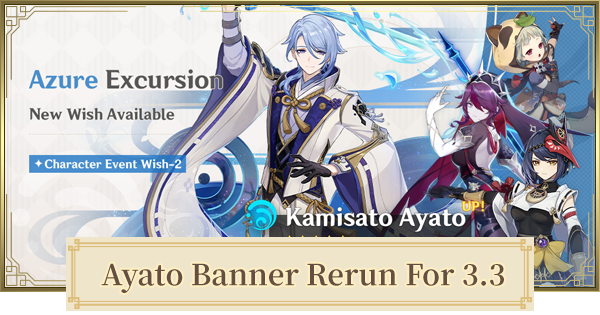 It's been confirmed that Ayato will have his second banner rerun in the second half of the 3.3 Update! It was shown in the 3.3 Livestream that she will have a double banner with Raiden Shogun.

Will Have Double Banner With Raiden Shogun

Ayato and Raiden Shogun's banner will be released at the same time. They will share the same Pity counter and 4-star characters.

Between Ayato & Raiden, Which Will You Pull?

Known for his work and playful manner, Ayato is the current head of the Kamisato Clan. He's graceful and a master of the sword, similar to his little sister, Ayaka.

Should You Roll For Ayato?

Pull If You Need A Hydro DPS

Ayato's kit makes him a great on-field Hydro DPS. Currently, it's still not known the amount of damage he could do, so it also depends on that if he would be effective as a main DPS.

Similar to that of Ganyu's Burst, Ayato's Burst creates a field wherein Hydro continuously applies to enemies. It's a great on-field skill that can work to enable other DPS to deal Vaporize, Electro-Charged, or Freeze enemies.

Ayato's kit makes him great for either a main Hydro DPS or a Burst Support. He is able to produce consistent Hydro Damage and is easier to use because of his relatively short cooldown.