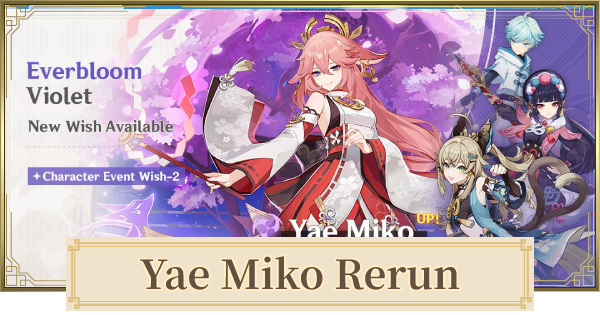 Check Out All The Character Banners Here!

Between Yae Miko & Childe, Which Will You Pull?

Who Is Yae Miko?

Yae Miko is the current Grand Priestess of the Narukami Shrine. She resides over the whole shrine and is considered one of high position in all of Inazuma.

Should You Pull In The Yae Miko's Banner?

Yae Miko's kit works well as either an Electro off-field support or an active on-field DPS. Her charged attack deals with AoE DMG making it a good source of damage.

Due to all of Heizou's attacks dealing Swirl, he's a fairly strong Anemo Main DPS and driver. He synergizes well with most support characters that have on-field abilities and his Elemental Skill packs quite a lot of damage.

Thoma For A Shielder Or Burgeon Main Stay

Thoma's a fairly great shielder, but his damage multipliers are not that great. However, he recently found a good niche for himself in Burgeon team comps wherein he's the recommended Pyro character to proc the reaction!

Yae Miko has a flexible well-balanced kit that allows her skill to provide Electro support even when she's off the field. Yae Miko can also hold her own as an on-field attack, so if you don't have Electro support, she's definitely one to pull for!

Layla offers utility with her shield, while also providing consistent Cryo application through her Burst and Skill.

Thoma's skill mechanics focuses on protecting the team while providing additional Pyro every normal attack you do making Thoma great as an enabler or support.