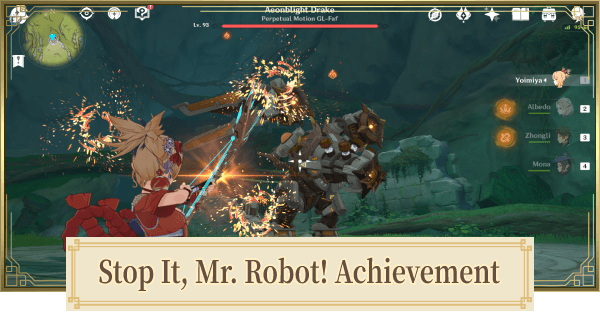 How To Get Stop It, Mr. Robot! Hidden Achievement

Shoot The Core During Charged Attack

To get the achivement, you need to stop The Aeonblight Drake in Sumeru, which has an attack where it will charge at you. During its charged attack, the core in its head is exposed so be prepared to aim & shoot. When successful, the Aeonblight Drake will be rendered inactive for a short while.

You need proper timing in order to get the achievement. If you are unfamiliar with Aeonblight Drake's attack sequence, please refer to the video guide below.

A Cave In Devantaka Mountain

You are going to encounter the area shown on the map initially from the Vimana Agama series quest. You can find the Aeonblight Drake inside one of the caves in Devantaka Mountain.

Use A Bow Character For Aiming The Core

It is likely that you can only unlock this achievement with a bow character since you cannot aim for the core with a character that uses a different weapon.

Create A Distance From The Aeonblight Drake

Use A Shielder To Keep You From Flying Around

It is great to use a shielder to keep your foot on the ground while in an aiming stance & waiting for an opportunity to interrupt the Aeonblake Drake's charged attack.

You might stumble upon an enemy that is sealed by stone pillars in the area. You can get the Legends of the Stone Lock quest if you are able to unseal & defeat all sealed enemies in different locations in Sumeru.

After reaching the throne room, you unlock the Stop It, Mr. Robot! achievement that gives Primogems x5 when claimed.

i actually manged to get this accidentally by spawning zhonglis pillar the exact second it started charging at me!