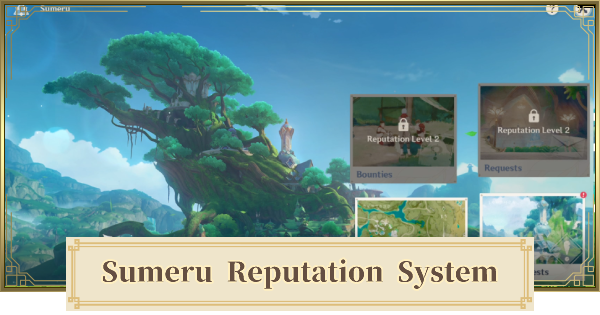 How To Unlock Reputation System

You need to progress the Archeon quest and complete the story "Dawn", which will unlock the world quest called "Corps of Thirty Recruitment". This world quest is to simply unlock the Reputation System in Sumeru.

Location Is In Sumeru City

After completing the world quest, the Reputation System will be unlocked in the location in the image above.

What Is The Sumeru Reputation System?

Tracks Your Reputation In Sumeru

The Sumeru Reputation Systems will show how much your Traveler is perceived within Sumeru. The better your Reputation is, the more rewards you can unlock!

How To Increase Reputation System

Will Require Doing Requests And Bounties To Increase

The most consistent way to increase your Reputation System is by doing the 3 weekly Requests and Bounties within in Sumeru. Remember that you can only do 3 of each per week across all nations!

Doing Sumeru World Quests also give Reputation points when they are completed. However, since there's a limited number of them, it's not the best way to farm for Reputation Points.