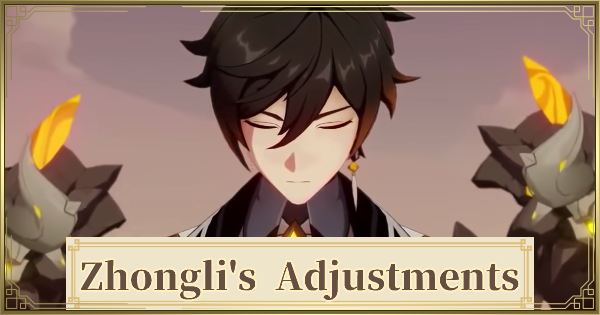 Zhongli having buffs and adjustments for Version 1.3 of Genshin Impact. Find out skill changes, when is the buff, new effects, release date, uses of skills and boosts.

More About Zhongli Here!Check This For Latest Updates & News!

Zhongli's overall adjustment and buff is said to be released on February 3, 2021. This will be released together with the 1.3 version of the game.

Normal, Plundge, Charged Attacks will be scaling of Zhongli's HP with the new adjustments. The damage will be increased by 1.39% of Zhongli's Max HP. This will make Zhongli deal more damage making him function as an effective DPS-Tank.

The damage of his Elemental skill will also be increased by 1.9% of his HP with the new buff. This makes the stele can be used for DPS instead of just being a crystal fountain.

If there are no Stone Stele in the field, it will summon one. The hold skill is now two skill at once making the longer cooldown more worth it.

Cannot Be Interrupted When Summoning Shield

While casting the hold skill, you will no longer be stopped or stunned by enemies attack with the new adjustment. While you will still receive a damage during the cast, this makes summoning the shield a lot easier.

Debuffs Enemy Around You When Jade Shield Is Active

This is one of the notable changes in Zhongli. All Elemental & Physical RES of enemies is reduced by 20% when Jade Shield is active. This makes Zhongli a moving debuffer that is not restricted by location. This is a kind of ability not yet seen in any other character in Genshin.

The damage of the Elemental Burst of Zhongli would be increased by the 33% of Zhongli's MAX HP as soon as the adjustment is added. Making the burst very powerful and a more stylish finisher for mobs.

The effect of Geo Resonance will be change to the following:

The Geo shield will be changed from Geo Absorption to having "150% Physical DMG and Elemental DMG Absorption". Making it more flexible and useful for various situation.

The adjustment is scheduled to be in Mid- February together with 1.3 Version of Genshin Impact.

that 33%max hp on the burst was already there on launch.

Zhongli buff is nice but the shield and resonance buff made Noelle and Ningguang one tier higher it is insane! MUCH HYPE