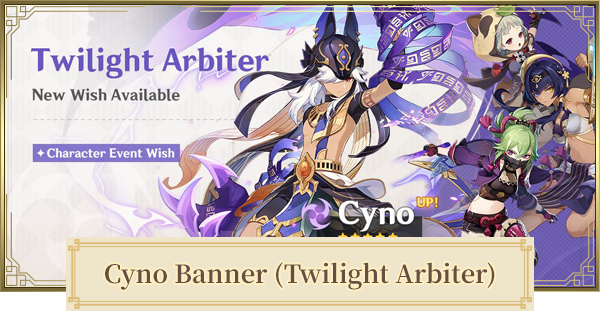 It was announced during the 3.1 Livestream that Cyno will have his own banner in the 3.1 Update. He will have a double banner with Venti's rerun banner.

Cyno is the General Mahamatra in Sumeru. He was a previous student of the Akademiya and was even a classmate of Lisa, but he has since rejected all things that relates to "knowledge".

Try your gacha luck with this Gacha simulator that we've prepared for Cyno's banner!

Should You Roll Cyno's Banner?

Pull For An Electro Main DPS

If you do not have an Electro carry yet, Cyno is a good Electro Main DPS. Based on his kit, he's set to be a strong character, improving greatly in damage. Although his kit is similar to Razor, Cyno wins due to the speculated amount of damage he can dish out.

Pull For Candace For A Normal Attack Buffer

Candace is able to imbue all party members with Hydro during her Burst. She also boosts the Normal Damage of other characters, making her highly valuable for teams with Childe or Ayato.

Sayu, and Kuki Shinobu are excellent supports, as their skills are flexible and thus can be used as sub-DPS and healers on the field.

Cyno is a strong Electro DPS Carry. During his Elemental Burst, he'll be able to deal high damage with all of his Normal, Plunging, and Charged attacks applying Electro.

Candace is an Elemental Support and a unique character that can infuse hydro to team's attack. During its duration, all attacks by characters that wield either Polearms, Swords, or Claymores will be imbued with Hydro.

Sayu can serve as a sub-DPS with her quick damaging elemental skill and her flexible Elemental Burst that both can heal and inflict damage on opponents.

Kuki Shinobu got especially stronger since the release of Dendro. She can heal and be an incredible off-field Electro Support that will be good at spreading Electro. She also works amazingly with Dendro characters.