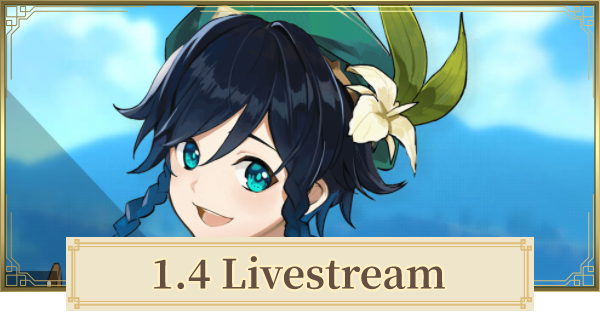 Confirmed To Happen On March 6

The Chinese Livestream for Version 1.6 is confirmed to happen on March 6, 2021.

The English Livestream To Occur Afterwards

A few hours after the Chinese Livestream, the english livestream normally hosted by Paimon and Aether's voice actors will happen. The dates are as follows:

The following codes has been shared througj Japanese Genshin Twitter and we confirmed it works for Asia. This means likely it works for other non-chinese servers. They are likely available only till 3/7 4:00 UTC. Redeem from here.

Venti is said to be one of the main stars in this version. He will also be released once again in his Rerun Banner.

Get another chance to get Tartaglia in version 1.4!

Rosaria Will Be Released

Rosaria will be release as a new character. She will be part of the 4 stars in Tartaglia Banner.

As you go through the main quest unlocked in version 1.4, you will battle a boss called Abyss Herald!

It has been announced that these three characters will join the MC with their own quests! This will be part of an event wherein you can get multiple endings.

Get a little Oceanid pet by challenging the powerful Oceanid in this event.

Challenge your skills and battle different monsters in this event and obtain various rewards.

Windblume /Windbloom festival will let you experience Mondstadt decorated with flowers and play the following mini-games!

A Continuation of your adventure with Dainsleif will be released on version 1.4... You might be able to meet someone important?

5 new weapons was introduced in the livestream. As of now, there are still no information of their skills.

You will be able to craft and store more than 3 Condensed Resin at the same time!

Reduce Your World Rank By 1

For people having more difficulty with their current World Level, you can now opt to temporarily lessen your World Rank!

You can now view elemental resonance details easily and be able to retry while challenging Spiral Abyss.

When is there going to be a klee rerun?

Livestream charts are reversed, the first one should be in the english section, and the second one below the chinese section.