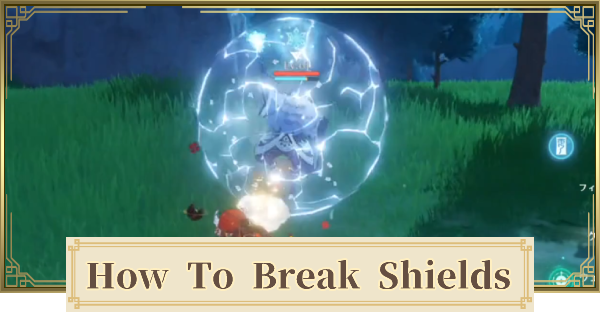 Shields are used as defensive barriers of enemies in Genshin Impact. This guide includes how to break shields, elemental weaknesses, claymore attacks & enemies that use shields.

How To Break Shields

The fastest way to destroy shields is by using attacks with elements that are strong against that element's shields. For example, Cryo shields can easily be melted away using Pyro attacks while Pyro shields can be destroyed fast against Hydro attacks.

Strong Even When Character Is Low Level

Even a level 1 character can do a lot of damage against shield so long as they use elemental attacks that shield is weak against. Damage to shields is not affected by DMG, but rather Elemental effects.

Check Out How To Level Up Characters

With no elemental weakness, Geo shields are hard to break. The best way to deal with them is by using Claymore-wielding characters when fighting against them.

Abyss Mages create elemental shields that you can easily break by attacking it with the element that the shield is weak to. In this case, you can even use low level characters as long as their element is strong against that Abyss Mage.

Immune To The Same Element

Attacking a Pyro Abyss Mage's shield with Pyro attacks will do nothing. Avoid attacking them with their shield's same element since they are immune to them.

Electro & Geo Will Work On All Shields

You can use electro or geo attacks to damage any type of shield. However, they will not do as much damage unlike if you use elemental attacks that the shield is directly weak to.

Use Elemental Attacks Shield Is Weak To

Similar to the Abyss Mages, you will need to use elements that the shields are directly weak to in order to break them. As soon as they build shields, switch to the character that can use their elemental weakness against them.

Deal As Much Damage Before They Put Up Shield

Initially, Fatui Skirmishers will not have shields, allowing you to directly damage their health. Take advantage of this and deal as much damage as you can before they build their shields.

Can Still Damage Health Even With Health

Even if a Fatui Skirmisher's shield is up, you can still damage its health when attacking it. It's small chip damage, only taking in 80% to 90% of the actual damage number.

Use Geo or Claymore Attacks

The Ironhide Lawachurl's shield can be destroyed by dealing a lot of damage by either using Geo attacks or with a Claymore. Some explosive skills by characters like Amber and Klee are also effective against it.

Deal Damage Before Shield Is Up

The Ironhide Lawachurl will put up a shield in the middle of the battle. Before that happens, aim to deal as much damage to it as possible.

The shield of the Electro Cicin Mage can be damaged and destroyed quickly by using Pyro attacks and causing Overcharged. It can be destroyed with elemental attacks, but it will also expire over time.

Shield Is Used When Health Is Low

The Electro Cicin Mage will put up the shield once it gets to a certain point in its health. If you can deal finishing attack before the shield is up, you can defeat her without needing to deal with the shield.

Shield Is Weak Against Pyro Attacks

The Frostarm Lawachurl and its shield are both weak to Pyro attacks, making it a necessity to have a Pyro character with you when fighting it.

Damage Before Shield Is Up

Shield Is Weak Against Pyro Attacks

The shield of the Cryo Cicin Mage can be damaged highly by using the Pyro element against it. Before entering a battle against a Cryo Cicin Mage, make sure to have a Pyro character in your party first or it will be a long battle.

Can Create Multiple Shields During A Fight

Unlike the Electro Cicin Mage that only creates a shield when her HP is down, the Cryo Cicin Mage will keep creating shields regardless of her health. You might need to destroy a few shields before actually beating her.

Physical shields can be destroyed by using elements they are weak to similar to elemental shields. Since physical shields are only facing one way, you can go behind the enemy and still attack them directly. Freezing them will allow you to do this.

Faster To Destroy With Overload

Overload will make breaking the shields faster, regardless of its element. Since it's explosive damage, it will deal a lot more damage compared to just setting it on fire.

Klee's attacks and Amber's element skill creates blast or explosive damage that can deal a lot more damage. They are especially effective in breaking shields!

I agree that this is too outdated. Abyss Lector shields are the ones that absolutely ruin spiral abyss runs if you cannot break them effectively and the information for ALL Abyss Lectors needs to be on here for this shield-vulnerability sub-site to be of any use at all.

Can we add the Abyss Herald and Abyss Lector?