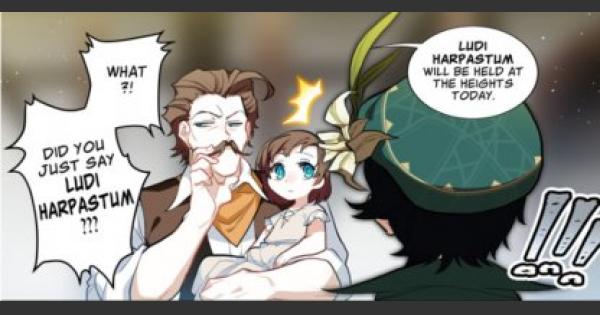 One Of The Season-Based Events

Ludi Harpastum is one of the seasonal events that was announced by official Genshin to release.

Ludi Harpastum is highly rumored around Genshin Fan communities that it will be released on version 1.6 together with Klee's Rerun.

A Festival In Mondstadt

Ludi Harpastum was mentioned in the Genshin webtoon which is said to be a festival of fun for 15 days.

Ludi Harpastum was showed in the official webtoon, in a panel it describes the mechanics of the game in which a girl throwing a ball above the plaza. It is a hint of what this event might give to us. Rumors coming from the Genshin Community said that it is also likely to be related to the rumored new challenge called Kaboomball Kombat.

Could Be Connected To Klee

The Ludi Harpastum is rumored to be released during the 1.6 update wherein Klee's return banner is speculated to also occur. It's possible that the Ludi Harpastum storyline will involve the lovable bombadier!

This section of the article is currently a work on progress. We shall update you once the event is officially released.