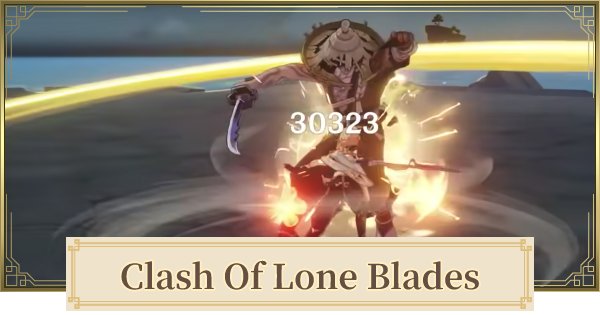 Clash Of Lone Blades - How To Parry & Gameplay Guide

Parry Before The Attack Connects

Unlike other games, the parry for this event has a bit of delay. It's better to use your parry before the enemy unleashes their attack rather than when they do.

It's recommend to always stay in front of your enemy. Parries will only connect if you're facing the incoming attack.

Only Specific Attacks Will Get Perfect Parries

Use Parry When He Sheathes His Sword

The visual cue you need to watch out for to do perfect parries is when Ookubo sheathes his sword. If you parry then, it will count as a perfect parry when he unsheathes it.

Keep Attacking Yasuhiko After He Does His Taunt

In order to remove the Yasuhiko's buff, you'll need to keep attacking him for him to do his signature overhead attack. Perfect parry this to deal tons of damage and to remove his buff.

Step Back Then Parry When He Has His Sword Overhead

If you're too close to Yasuhiko during his signature move, the parry won't connect. Step back a bit then use your parry to be able to connect and deal Perfect Parry damage.

The shockwaves that Mishima Michitoshi unleashes can be parried. But at higher difficulties, he has a tendency to unleash these waves one after another. It's better to just dodge them if that happens.

To be able to get the attack that can be Perfect Parried, you will need to attack Mishimi when he has with sword at a block. Once he raises his sword overhead, you can start the parry!

Clash Of Lone Blades - How To Play & Event Details

Talk To The Martial Artist To Start The Battle

After unlocking the event, you just need to head to the event area and talk to the Martial Artist designated to start the battle. You will be fighting different enemies daily.

You ca choose between 3 difficulties when challenging the enemy of your choice. Each difficulty has their own set of rewards so aim to complete them all!

Clash Of Lone Blades - How To Unlock?

Finish The Quest "True Tales Of The Violet Garden: Act 3"

You can unlock the Moon And Stars Inscribe by finishing "True Tales Of The Violet Garden: Act 3" which is unlocked at April 11, 2022. Since this is an event series, you need to finish Act 2 to unlock Act 3.

During the Irodori Festival, you can also claim the powerful Xingqiu. Xingqiu is a must-have 4 star that is able to increase the damage of many teams by providing powerful off-field damage.